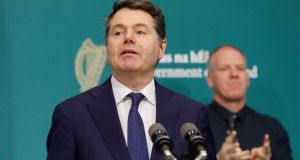 Minister for Finance Paschal Donohoe said the Government was confident at this stage that it would not need to access ESM funds. Photograph: Leon Farrell/Photocall Ireland

Ireland is unlikely to rely on the European Union’s main rescue package to fund its coronavirus support schemes, Minister for Finance Paschal Donohoe has said.

EU finance ministers on Thursday night agreed a €540 billion package of measures to combat the economic fallout from the pandemic, which includes credit lines of up to €240 billion from the European Stability Mechanism (ESM), the euro zone’s bailout fund.

Mr Donohoe said the Government was confident at this stage that it would not need to access ESM funds and would borrow the money it needs “directly through the financial markets”.

The National Treasury Management Agency (NTMA) raised €6 billion on Tuesday in its largest bond sale in over a decade. The seven-year bonds were sold at a yield or annual interest rate of just 0.24 per cent, which is potentially less than what member states borrowing from the ESM would be charged, and attracted record demand from buyers.

Taking loans from the ESM also comes with the requirement to balance the books down the road.

“Given that we are currently able to borrow at a quarter of a percentage point, it’s very likely that Ireland will be able to find attractive terms” to fund its own programmes, Mr Donohoe said.

He said, however, that Ireland might access some of the €200 billion being made available from the European Investment Bank (EIB) to help fund companies directly.

The EIB is to provide €25 billion in emergency liquidity to cash-strapped corporates immediately, increasing to up to €200 billion over the short term, as part of the EU’s response to the crisis.

“The biggest example of this will be the very large numbers of people on the Live Register and the fact that we will be in a deficit position as opposed to a growing surplus,” he said.

“And that means that measures around getting people back to work now have a prominence,” he said.

The Republic’s unemployment rate jumped to a record 16.5 per cent in March with nearly 420,000 people now classified as out of work. The Government is also forecast to run a budget deficit of €19.6 billion this year, instead of a surplus of €2.2 billion, due to falling tax receipts and additional spending on support programmes.

The EU deal was overshadowed by the failure of member states to resolve the contentious issue of eurobonds – jointly issued debt – after the Netherlands opposed the plan.

Mr Donohoe played down the evident divide in Europe over the issue but noted that Ireland had supported the plan for “a new instrument” to fund crisis support schemes.

Despite the lack of agreement, he said there was acknowledgment on all sides “that the level of human suffering and the level of change we’re going to see in society is potentially so big that, if Europe does not have an answer to that, the political ramifications could be very, very profound”.

Mr Donohoe said the deal did provide more than half a trillion euro of funding for the EU economy and after the meeting “there was a feeling of relief that we had got something that we could all stand over”.