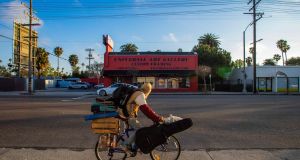 In the US, the total number of newly unemployed due to the crisis rose to 17 million. Photograph: Apu Gomes/AFP

The 19 members of the euro zone hammered out a compromise on Thursday night to aid states in need of funding to address the profound economic fallout from the coronavirus pandemic. Naomi O’Leary reports.

The pandemic sweeping the world will turn global economic growth “sharply negative” in 2020, triggering the worst fallout since the 1930s Great Depression, with only a partial recovery seen in 2021, the head of the International Monetary Fund said.

In the US, the total number of newly unemployed due to the crisis rose to 17 million. The Federal Reserve moved to offer an extra $2.3 trillion (€2.1 trillion) in credit and support the market for high-yield corporate debt.

Here the ESRI said it was confident pandemic pay supports will “significantly” cushion the incomes of affected workers but will cost nearly €5 billion over three months. The institute’s analysis comes as new figures show the Republic’s unemployment rate trebled to a record 16.5 per cent in March, which equates to just under 420,000 people being out of work.

The coronavirus is poised to claim another 2,000 jobs with theclosure of department store chain Debenhams’ shops in the Republic, writes Barry O’Halloran.

Barry also reports on how DAA, the State company responsible for Cork and Dublin airports, will put most of its 3,500 workers on a four-day week for almost two months from April 26th, cutting their pay by 20 per cent.

Yesterday,The Irish Times announced a temporary pay cut of up to 30 per cent for higher-paid managers and editors in the group as part of a series of immediate cost-reduction measures.

Paddy Power owner Flutter Entertainment’s US casino partner, Boyd Gaming, has put most of its 25,000 workers on unpaid leave in the face of a month-long Covid-19 shut down.

In his column, economist John FitzGerald argues Covid-19 will limit next government’sability to tackle housing and climate change and that any new administration must underpromise in its programme for government.

In this week’s Agenda, Barry O’Halloran assesses the impact of Covid-19 on the aviation sector, where consolidation was already on the cards even before the crisis. “Few people are flying now but the great unknown is whether they will want to when this is all over – or will our current enforced reliance on remote working and video conferencing herald a more fundamental change?”

In his new weekly column, Richard Gillis recalls how Napster showed CDs to be little more than “a few hit songs bundled together with a bunch of B-side”. Will the same fate apply to traditional multi-sport subscription packages, where you “come for the Premier League, stay for carp fishing”?

Finally, if you hoping to catch up on your reading during the lockdown, Olive Keogh has several recommendations, with new business books and golden oldies that never go out of fashion.