Merkel and Macron intervene to secure accord between Italy and Netherlands

Eurogroup president and Portuguese finance minister Mario Centeno announces a deal reached by euro zone finance ministers that amounts to half a trillion euro to help states respond to the economic fallout from the Covid-19 pandemic. Video: Reuters 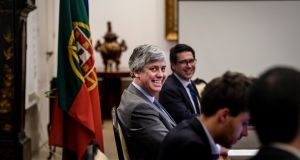 Euro zone finance ministers reached a compromise on Thursday to break days of stalemate over how to respond to an economic downturn that threatens to be the worst since the Great Depression in the 1930s.

Under the deal, which amounts to €500 billion in a range of tools, states can borrow from the European Stability Mechanism bailout fund to finance spending needed to overcome the crisis.

“We decided to pull half a trillion euro into responding to this crisis,” said Eurogroup president and Portuguese finance minister Mario Centeno.

“This is totally unprecedented. We never reacted so quickly to a crisis as to this one. Will it be enough? Well, we need to now fight the virus, start reacting in terms of opening our economies as soon as possible ... and then we can start rebuilding.”

But it dashed the hopes of Italy, Ireland, Spain and six other member states that had called for eurobonds to bring down borrowing costs and send a signal of unity as the continent confronts a health crisis that threatens to become an economic disaster.

Funds will be available from the European Investment Bank, and the so-called Sure fund of the European Commission, which will subsidise employees’ wages so that companies can cut working hours of employees rather than sack them.

Work will continue on a further recovery fund, which will be passed on for discussion by EU leaders.

The compromise was reached after Italy and the Netherlands both backed down from polar opposite positions, after the intervention of both German chancellor Angela Merkel and French president Emmanuel Macron to persuade the sides to reach an accord.

Along with Germany, Finland and Austria, the Netherlands staunchly opposed joint debt issuance in the form of eurobonds or coronabonds, viewing it as unreasonable to be asked to guarantee the debts of other countries.

The Hague also insisted that loans from the bailout funds not used for health costs should not be unconditional, and that there should be incentives for weaker economies to reform their finances – unacceptable to Italy.

Both Italy and the Netherlands claimed victory after the compromise. Italy claimed eurobonds were still on the table and that ESM loans would be unconditional. Meanwhile, Dutch finance minister Wopke Hoekstra said ESM loans for non-medical costs would come “with conditions”.

The two positions were reconciled by Mr Centeno in a press conference following the meeting, when he said the definition of health-related costs was broad enough that countries should be able to borrow up to the full 2 per cent of GDP or €240 billion allowed in the fund for this kind of spending.

“Countries, the only requirement they have is to spend this money in health related expenditures in cure and prevention,” Mr Centeno said. “This money can go to direct and indirect costs health related with the Covid crisis. So it is not that narrow a definition.”