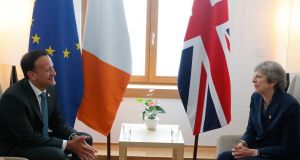 Taoiseach Leo Varadkar and British prime minister Theresa May on the sidelines of the EU summit in Brussels, last week. Photograph: Yves Herman/AP

Farmers and agri-food operators are becoming anxious about the “weight of consideration” being given to the Border question in the Brexit negotiations to the detriment of the more significant Ireland-UK “west-east” trading relationships, the head of the Irish Creamery Milk Suppliers Association (ICMSA) has claimed.

Pat McCormack was speaking after the publication of a recent Bord Bia survey showed that a majority of Irish food and drinks companies continue to believe that they would have opportunities to trade in the UK after Brexit.

Mr McCormack said it was important that this confidence “did not tip over” into a complacency that things would “somehow work out in the end and that the interests of Irish farming and agri-food were being minded”.

The Republic’s trade with the UK is worth about €65 billion a year and sustains over 400,000 jobs on both islands. Irish farmers and dairies sell 100,000 tonnes of cheese to the UK every year while more than half of the Republic’s €2.5 billion beef exports go to the UK.

Mr McCormack said the Irish Government had clearly prioritised the preservation of the no-Border arrangement with the North as its “bottom line”.

“But it was incredibly important to acknowledge that this emphasis effectively prioritised the political over the economic and while that was our Government’s direction, and a choice they were perfectly entitled – even bound – to make, the net effect was that the centuries old, multibillion euro trade between Irish food producers and their British customers was relegated and often seemed, so far as the Irish focus was concerned, to be something of an afterthought to the ‘no hard border’ core policy,” he said.

“We don’t expect the Irish Government to move from their ‘no hard border’ policy – nor should they,” Mr McCormack said.

“ But, to be very frank, ICMSA believes that we should be giving the trade figures a little more concentration and not getting completely hung up on the question of how exactly the post-Brexit Border with the North will look.”

“ICMSA accepts the validity of the Government’s decision to concentrate on the Border and prioritise the political over the economic, but everyone has to realise that our economic ties are much more east-west than they are north-south,” he said.

“This is a balancing act – and a very difficult one at that. We have to stand our ground on our right not to have a hard Border with the North with whom we do significant business and have everyday interaction, but we equally have to weigh up the reality that it is our relationship with our British customers that drives our multibillion euro beef, cheese and other agri-sectors,” he said.