Green bonds are issued to finance climate and environmental investments 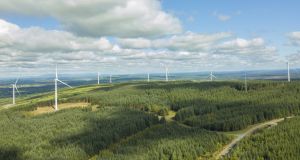 A slew of countries have tapped the green-debt market, as governments globally seek to live up to the Paris climate agreement. Photograph: iStock

Ireland has been tipped to join a growing number of sovereigns raising finance from the sale of “green bonds”, which may command lower interest rates than mainstream debt at a time when the European Central Bank (ECB) is winding down its €2.5 trillion stimulus programme.

Ryan McGrath, head of fixed income strategy at Cantor Fitzgerald in Ireland, said in a note to clients on Monday that the National Treasury Management Agency (NTMA) may sell green bonds later this year.

Mr McGrath’s comments came after the NTMA, which manages the State’s national debt, published its latest quarterly sale schedule, outlining that it will auction bonds on July 12th and September 13th.

The NTMA’s deputy director of funding and debt management said at a conference in London last month that the agency was looking at the green bond market as it assesses what investors globally are looking for.

Pioneered by the World Bank a decade ago and subsequently adopted by the corporate world, Poland became the first country in 2016 to issue green bonds to finance climate and environmental investments.

A slew of other countries, such as France, Indonesia and Belgium, have since tapped the green-debt market, as governments globally seek to live up to the Paris climate agreement and investor demand grows for socially-responsible investment opportunities.

Recent research carried out by the Association for Financial Markets in Europe on French green bonds suggests that investors will pay a premium – and accept a lower market interest rate, or yield – for green bonds than conventional non-green-labelled sovereign debt.

Green bond issuance ballooned to a record $161 billion (€138.8 billion) last year, up four-fold from 2015, according to Climate Bonds Initiative. The CBI estimates that green bond sales will raise as much as $300 billion (€258 billion) globally this year.

Meanwhile, the routine bond auctions planned by the NTMA over the next two months follow on from the agency raising €11.25 billion so far in 2018 out of a full-year debt-raising target of between €14 billion and €18 billion.

While there had been fears that euro-zone bond yields would spike as the ECB wound down its multi-trillion-euro, bond-buying programme, known as quantitative easing, the market seems to have taken in its stride the central bank’s announcement last month that it will end quantitative easing in December.

The yield on Ireland’s benchmark 10-year bonds has fallen to 0.81 per cent from a higher of 1.07 per cent last month, helped – for the moment at least – by the ECB’s guidance that its record low interest rates will remain unchanged until after the summer of 2019.