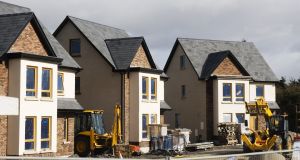 The pace of growth in Irish house prices has begun to slow, according to the latest figures from estate agent Sherry FitzGerald.

The average value of second-hand residential homes in the Republic rose 1.2 per cent in the second quarter of the year, leaving the growth rate for the year to date at 3.2 per cent, according to Sherry FitzGerald.

This represented a slowing in the rate of house price inflation from the same period last year, when prices rose 4.4 per cent.

Excluding Dublin from the quarterly figures pushes the quarterly price increase to 1.4 per cent, and 3.1 per cent for the first six months of the year. That figure is one percentage point lower than in the previous year.

In the rest of the State, Galway recorded the highest increase during the first half of 2018, with prices 4.8 per cent higher. Limerick and Cork showed a rise of 1.6 per cent and 1.4 per cent respectively.

“After a strong opening quarter there was a significant moderation in the pace of price inflation, most notably in Dublin and the regional centres of Limerick and Cork,” said Marian Finnegan, chief economist with Sherry FitzGerald.

“The combination of an increase in the delivery of new homes in Dublin and the tightening of macroprudential policy on mortgage lending [by the Central Bank] both appear to have led to this slowdown in price inflation.”

According to the residential property price register, almost 11,500 transactions were logged in the first half of the year. Removing multi-family and portfolio sales pushes the figure to just under 11,000, with 3,600 in Dublin. The figures reveal a 5 per cent increase in the volume of sales nationally for the period, and 6 per cent in Dublin year on year.

The number of sales of new homes recorded during the period rose 41 per cent on average, and the value was 8 per cent higher.

The number of cash buyers in the market has fallen slightly compared with last year, when the rate was 44 per cent. Data from the Banking and Payments Federation Ireland for the first quarter of 2018 showed 41 per cent of transactions did not have a mortgage attached.

Owner occupiers accounted for 72 per cent of all purchasers in the first half of the year, with investors continuing to exit the buy-to-let market. Sherry FitzGerald’s report said 34 per cent of vendors were selling their investment properties, and purchasers for investment purposes represented less than a fifth of buyers.

Ms Finnegan said there were positive trends in the figures. “Firstly, the positive impact of the increased delivery of starter homes is evident not only in the increase in sales volumes but also in the stability of price performance in this sector,” she said. “Such trends underpin the success of the ‘help to buy’ scheme.”

She said an extension of the scheme – due to end in 18 months – should be considered until the starter home market returns to equilibrium.

“There is also evidence of notable moderation in price inflation. This moderation can be partly explained by the increase in stock of new homes. However, there is also anecdotal evidence that the tightening of the macroprudential rules in December last may also be a contributing factor,” she said.

“This would point to a reduction in liquidity in the market and therefore a tightening of activity as the year progresses. This could be a retrograde step in a market where activity is already well below long-term or international trends. As such, it needs to be monitored carefully.”