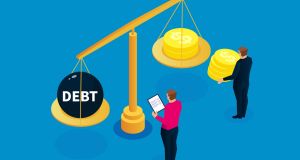 If the economy were to return to full employment by 2023, it would be necessary immediately to return to balancing the books

A century ago budget speeches paid no heed to the effect on the wider economy of the decisions being taken on expenditure and revenue: all that mattered was balancing the books.

However, after the disaster of the Great Depression, economists, led by Keynes, came to understand that fiscal policy should play an important role in balancing the economy.

When output is below its normal level the government should stimulate the economy. In doing so they will raise output back to its maximum capacity. Failure to provide such a stimulus will result in a wasted opportunity to minimise unemployment and improve living standards.

A corollary of this approach is that, when demand exceeds the economy’s productive capacity, the government should take the steam out of the market by raising taxes or cutting expenditure.

When the economy is fully employed, pumping more money in will only result in inflation or an unsustainable surge in imports, financed by borrowing. Stimulating an economy under these circumstances does not increase growth or the sustainable resources available for society.

The fact that interest rates are currently close to zero means that the government has been able to borrow very large sums to tide us over the lockdown year (and a half).

Unfortunately, because of the restrictions on households spending their income, this stimulus is so far not very effective. However, once the lockdown ends, the fruits of today’s fiscal policy may be a reasonably rapid return to full employment.

As was discussed at a recent Irish Fiscal Advisory Council conference, once the economy is restored to working order, borrowing more cheap money won’t necessarily grow the economy’s capacity to meet society’s needs.

In a closed economy working at full capacity, if government investment increases, it is at the expense of lower investment elsewhere in the economy. In some circumstances, depending on the relative returns to public or private investment, more public expenditure could reduce long-term growth.

In an open economy like Ireland, some of the excess demand generated by government can be met temporarily by imports, financed by borrowing abroad. However, such a boom fuelled by imports would not be sustainable and, as we have seen in the past, weaning the economy off this track can be exceptionally painful.

Unfortunately, the appropriate use of fiscal policy to balance the economy went out of fashion in the late 1990s. As a consequence, following years of inappropriate fiscal stimulation, in 2008 the country was living well beyond its means. With a disproportionate share of national output devoted to building, high levels of personal consumption were only achieved through large-scale imports.

The resulting financial crash did huge damage to us all. Sooner or later Ireland had to reallocate employment and capital from excessive building to producing other necessary goods and services – a painful process.

If interest rates had been zero in 2009, as they are now, we might have been able to postpone the necessary tough fiscal adjustment till the early 2010s, but it would have had to happen at some stage.

However, because interest rates were so high, we could not afford to use fiscal policy in Ireland to provide temporary insulation, and to delay the very painful necessary adjustment. But there was a real failure of fiscal policy at EU level – stronger countries in a position to counteract the recession through increased spending chose not to.

The current exceptional borrowing by the Irish Government comes at zero interest rates. While interest rates are likely to stay low over the next two to three years, when a change comes, it could be rapid.

For example, the fiscal-induced boom of the late 1970s was financed by borrowing at negative real interest rates. Come the 1980s, real interest rates rose dramatically. By 1985, the government’s interest bill reached almost 10 per cent of national income, compared to today’s figure of about 2 per cent.

However, the borrowing policy of the NTMA has insulated us from much of the risk of interest rate increases, as over half of our large national debt will not have to be refinanced for at least a decade.

As a result, the Government can continue to insulate the economy from the ongoing crisis until a recovery begins. However, the more rapid the recovery, the sooner the normal fiscal rules should apply.