Derek Moran to leave post at helm of Department of Finance

Secretary general will depart in July, with his successor facing big economic challenges 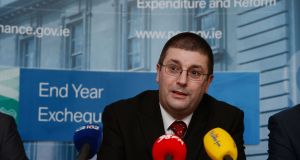 Derek Moran, the secretary-general of the Department of Finance, has told the department that he will leave the post in July, when his seven-year term is up.

It means major change in the senior civil service economic posts, with Robert Watt having moved from secretary-general of the Department of Public Expenditure and Reform to head the Department of Health, initially on an interim basis.

There had been speculation that Mr Moran’s term at the Department of Finance might be extended, but the department has confirmed that he will not seek an extension.

Mr Moran, a long-time public servant, was appointed in July 2014. He is a veteran of the Department of Finance, where he was previously assistant secretary-general with responsibility for fiscal policy, involving work on the budget. Secretaries-general are appointed on initial seven-year terms, though in some cases appointments are extended.

Mr Moran served as secretary-general as the economy returned to growth and balanced budgets after the financial crisis and has been centrally involved in planning the economic and budgetary response to the Covid-19 pandemic.

His departure closely follows the recent move by Mr Watt to interim secretary-general at the Department of Health. Mr Watt is favourite to be appointed full time to this role, though there has been controversy over a proposed increase in the job salary.

Changing of the guard

The departure of both men signals a changing of the guard in terms of economic policy management at a time when the State faces significant challenges, with massive borrowings to combat the pandemic.

Other possible applicants might include Des Carville, who heads the section looking after the State’s bank shareholding; and Colm O’Reardon, who recently joined from the Department of Health, where he had been acting secretary-general. He is now overseeing the planned commission on tax and social welfare, likely to be established formally in the coming weeks. Department chief economist John McCarthy is also a possible contender.

The job is likely to attract interest from across the public service and from the private sector. The same applies to the job of secretary-general in the Department of Public Expenditure and Reform, if Mr Watt does move permanently to the Department of Health. This is being filled on an acting basis by David Moloney, a senior public servant from the department.

The departments of finance and public spending – formerly one department – work closely together on issues such as the annual budget, where responsibilty is split between the two.

The departments face major challenge in the years ahead as the State moves beyond the pandemic and has to restore the budget to some kind of sustainable trajectory.

4 The Naked Collective bags Oscar for its healthy drink

10 ConsenSys to create more jobs in Dublin after $65m fundraise