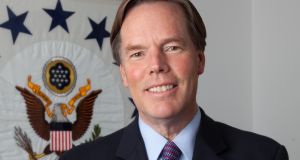 Ireland can be a bridge between the United States and the European Union following the exit of Britain from the bloc, the former US ambassador to Nato Nicholas Burns has said.

Appearing in the first of a speakers’ series run by law firm DLA Piper, Mr Burns said Ireland now has an opportunity to become a strong link between Washington and Brussels in a post-Brexit climate.

“While the US and Germany are trying to expand their relationship, it is difficult given the poor relationship between president [Donald] Trump and chancellor [Angela] Merkel. I’m wondering if it might now be possible for Ireland to become a bridge of sorts between the US and the EU,” the Harvard professor said. “Ireland has historically had a close relationship, trade and investment ties with the United States, and the United States puts a lot of trust in Dublin.”

Mr Burns, who is advising Democratic presidential candidate Joe Biden and worked for 27 years in the US State Department, recalled how, when he was undersecretary of state, he would phone the political director in the foreign and commonwealth office in London almost every day.

“I called because there was absolute trust between him and me and our two governments. Even when we disagreed, we trusted each other. There were countless times when the British were able to translate, as it were, the United States to the EU and then translate the EU back to the United States. It allowed us to get through some very difficult questions.

“We Americans have lost that link. We should have better relationships than Trump has with Germany and France but we don’t. Ireland is in a unique position.”

Mr Burns predicted that there would be “no meaningful action” on trade policy or progress on a US-EU trade deal in the next four months before November’s election.

He also warned that a return to globalisation would not simply “snap back” after the election and after the coronavirus pandemic. “I think trade is going to be a highly contested issue – both within the Republican and Democratic parties and between them.”

He added that the composition of Congress would be a key factor.

Similarly, he said that taxation and the issue of global supply chains was also a sensitive issue for Democrats as well as Republicans.

Noting that Mr Trump had talked about bringing some manufacturing back to the United States, he said that “individual companies will make these decisions. There is not going to be a grand edict from the government in Washington.”

But he noted that Ireland, for example, is a major producer of ventilators. “A lot of Americans are hoping that next time we’ll be able to produce more quickly a badly needed, urgently needed device like ventilators if there’s another pandemic,” he said.

“This is a wild card issue and it’s very difficult to predict where it’s heading.”

Mr Burns, who was formerly ambassador to Nato and Greece, has been touted as a possible secretary of state in the Biden administration if Mr Trump loses November’s election.

He said that while America has been “adrift and pulling back on its traditional leadership role” under the presidency of Donald Trump, Joe Biden is a “strong supporter of the US, EU and Nato relationships . . . He believes that a lot of our strengths come out of our alliances and partnerships.”

Pointing out that the EU and the US share the same concerns about China as well as issues like climate change, he added: “The EU and the US have so much in common . . . we should push right back ideologically and rhetorically, to defend our democratic systems.”

There has been an absence of strong, data-driven, science-based leadership from the president

Mr Burns also chastised the US government’s handling of the coronavirus pandemic, noting that leadership on the issue has come from mid-size democracies such as South Korea, Australia, New Zealand, Israel, Taiwan and Germany.

“Who has failed? The United States has failed,” he said. “There has been an absence of strong, data-driven, science-based leadership from the president, vice-president and the cabinet. That has been the big problem in the United States.”