Mortgage approvals down 62% in May 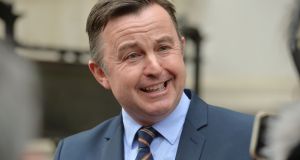 Brian Hayes, chief executive of the Banking and Payments Federation: said demand within the housing market may be more resilient than expected. Photograph: Alan Betson

Almost 1,900 mortgages worth €442 million were approved in May, down 62 per cent on the same period last year, as Covid-19 restrictions dampened activity in the State’s housing markets.

“As expected we have seen a further fall off in mortgage approvals figures during May, down just over 14 per cent in volume terms on April,” BPFI chief executive Brian Hayes said.

“ This is not unexpected given the scale of the lockdown and physical restrictions, and their impact on employment figures and economic uncertainty,” he said.

“ Similarly, the 60 per cent fall in the volume of approvals when compared to May 2019 is not surprising given the scale of the pandemic and its immediate impact on incomes and business activity,” he said.

“However, even under the most severe restrictions when the majority of the country was still shut down and during what has been an unprecedented shock to both the Irish and global economy, it is significant that almost 1,900 mortgages valued at €442 million were approved here during the month of May,” Mr Hayes said

“ This shows that the demand within the housing market may be more resilient than expected and also demonstrates that banks are meeting this demand and continuing to approve new applications despite the challenges in the current environment,” he added.