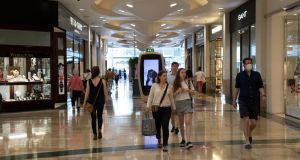 They’re back: Shoppers in the Dundrum Town Centre on its first day of reopening after the Covid-19 lockdown. Photograph: Colin Keegan, Collins Dublin

While foreign multinationals make a valuable contribution, the success of the Irish economy “now depends very heavily on the progress of domestic business”, a study by the Economic and Social Research Institute (ESRI) has concluded.

In a research paper entitled Understanding recent trends in the Irish economy, economist John FitzGerald suggests that the economy here grew by about 5 per cent a year between 2013 and 2018.

This is considerably less than the reported growth numbers and a fraction of the 25 per cent reported in 2015, which was derided internationally as leprechaun economics. A better measure of real growth here – and one that weeds out multinational distortions – is Net National Product (NNP), he said.

NNP is defined as the market value of a nation’s goods and services minus depreciation, often referred to as capital consumption.

Using recent Central Statistics Office (CSO) figures, Prof FitzGerald is able to assess the contribution to NNP from each industrial sector broken down by foreign and domestically-owned businesses.

“Instead of exceptional and erratic growth rates, as seen in the headline CSO data for GNI (gross national income), the pattern shown here for NNP is smoother and more plausible,” he said.

He noted that while foreign firms account for over half of the gross value added in the economy, they only account for a fifth of NNP and a quarter of the wage bill.

Foreign and domestic firms grew at a similar rate since the economy began to recover from the financial crisis in 2013, he said.

“While the contribution to growth of foreign firms has been concentrated in the manufacturing, IT, financial and distribution sectors, the growth of the domestic sector has been spread across the economy,” the research suggested.

In both the manufacturing and IT sectors, the contribution to NNP of domestic business is similar to that of foreign firms, it said.

“These results indicate that, while foreign multinational enterprises make a very valuable contribution to growth, the success of the economy now depends very heavily on the progress of domestic business,” it said.

The report follows a warning on Wednesday from the European Central Bank chief economist Philip Lane that solid economic data may not be a good guide to how the euro zone recovers from its deepest economic crisis in living memory.

Having bottomed out in April, the bloc’s economy is reviving as curbs linked to the coronavirus pandemic are gradually lifted. Unexpectedly strong PMI data on Tuesday raised hopes for a relatively quick, V-shaped recovery.

But Mr Lane said that while “substantial improvement” in near-term indicators was normal given the depth of the contraction, this was not a good guide to the future. Activity would remain far below pre-crisis levels for an extended period, he said, given lingering restrictions.

He said fiscal measures, particularly talks over a €750 billion EU recovery package, were also likely to have a major impact on how quickly confidence rebounded. “The outcome of negotiations about the EU recovery fund will be an important factor in determining the future path for the euro area economy,” Mr Lane added.

The ECB was determined to support this recovery and it could even cut interest rates, though such a move might prove ineffective because longer-term sovereign yields become virtually unresponsive to rate cuts in stressed conditions.

“While we stand ready to cut policy rates in the future as market conditions normalise and if warranted by the medium-term inflation outlook, this evidence tilts the balance towards asset purchases as the more efficient tool in current circumstances,” Mr Lane added. – Reuters