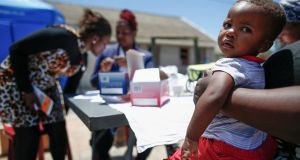 Tax avoidance by multinationals costs poor countries €92 billion a year, which could fund healthcare to save the lives of at least six million children. Photograph: Nic Bothma/EPA

Ireland has been branded as one of the worst tax havens in the world, on a par with countries like Bermuda and the Cayman Islands when it comes to helping big business dodge billions of euro each year in tax.

In a damning report by development agency Oxfam, Ireland was placed sixth in a list of 15 countries that facilitated large-scale corporate tax avoidance through profit-shifting, aggressive tax planning structures and so-called sweetheart deals.

Jim Clarken, chief executive of the agency’s Irish arm, said Ireland was part of a toxic global system that services the very wealthiest while ordinary people pay the price and lose out on essential public services.

“Around the world, we are known as a country of good fun, bad weather and awful tax policies that facilitate worsening inequality by allowing some of the world’s richest companies to avoid paying their fair share to society,” he said.

In Oxfam’s Tax Battles report, Bermuda was ranked as the worst of the 15 countries under review, followed by the Cayman Islands and the Netherlands.

Switzerland and Singapore were ranked in fourth and fifth place followed by Ireland, with Luxembourg, Curacao, Hong Kong and Cyprus making up the rest of the top 10.

The final five were the Bahamas, Jersey, Barbados, Mauritius and the British Virgin Islands.

The report was published to coincide with an appeal hearing by the whistleblowers behind the LuxLeaks affair, which exposed the various preferential tax deals afforded to large corporations by Luxembourg.

Although the UK is not on the list, Prem Sikka, a professor of accounting at Essex Business School, last week said the country “certainly has some shades” of being a a tax haven following the decision by US fast food giant McDonalds to relocate its non-US tax base from Luxembourg to Britain.

The UK had low headline rates of corporation tax – falling to 17 per cent in 2020 – and it did not have a very good record on chasing large companies for tax bills, he says. McDonald’s is under investigation by the EU for its tax affairs in Luxembourg, with a report due soon.

The Oxfam report highlighted the tax paid by Apple in Ireland, which worked out at 0.005 per cent, according to a European Commission recent investigation, while noting the Commission’s ruling that the tech giant owed about €13 billion to Ireland in back taxes.

Both the Irish Government and Apple are appealing the Commission’s ruling.

In its report, Oxfam said collecting tax was one of the key means by which governments are able to address poverty.

“But big business is dodging tax on an industrial scale, depriving governments across the globe of the money they need to address poverty and invest in healthcare, education and jobs,” it said.

‘Race to the bottom’

The agency said its report exposed the world’s worst corporate tax havens, which it described as “extreme examples of a destructive race to the bottom on corporate tax which has seen governments across the globe slash corporate tax bills in an attempt to attract business”.

The charity calculates that tax avoidance by multinational corporations costs poor countries about €92 billion a year and that this money could educate the 124 million children who are not in school and fund healthcare to save the lives of at least six million children.

The Department of Finance vehemently rejected Oxfam’s verdict on Ireland.

“Ireland does not meet any of the international standards for being considered a tax haven. Ireland is fully compliant with all international best practices in the areas of tax transparency and exchange of information,” it said.

The department said the corporation tax rate and incentives do not make the country a haven.