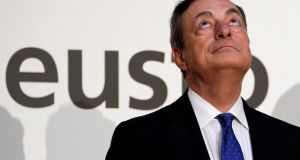 The European Central Bankhas rejected a request by ailing Italian lender Monte dei Paschi di Siena for more time to raise capital, a source said yesterday, in a move that piles pressure on the Italian government to bail out the bank.

The country’s third-largest lender, and the world’s oldest, had asked for an extension until January 20th to try to wrap up a privately funded €5 billion rescue plan in the face of fresh political uncertainty.

The ECB’s supervisory board turned down the request at a meeting yesterday on the grounds that a delay would be of little use and that it was time for Rome to step in, the source said.

The Italian government is expected to intervene to recapitalise the bank to avert the risk of it being wound down. The failure of Monte dei Paschi could threaten the savings of thousands of retail investors, ripple across the wider banking sector and provoke a financial crisis.

Italy faces the risk of early elections, and the prospect of an anti-euro party coming to power, after prime minister Matteo Renzi quit this week following the heavy defeat in a referendum on his plan to reform the constitution.

The Italian finance ministry said it would not provide detailed comment until Monte dei Paschi di Siena responded to the ECB decision and it still believed such a capital increase was an “option”.

Pier Carlo Padoan, the finance minister and a possible contender to replace Renzi, held a meeting earlier yesterday with the bank’s chief executive, Marco Morelli, and leaders of the banking consortium that have been working on the capital infusion for the bank.

Amid the uncertainty, the price of the bank’s bonds plunged. Some bondholders had agreed to a debt-to-equity swap, which was part of the private sector solution, and it was not clear what their status would be if the deal no longer took place. –( Reuters/ Guardian Media)

1 State’s biggest landlord records 30% rise in rental income
2 What will the office market look like after the great remote working experiment?
3 Irish tourism must also help itself to survive the pandemic
4 Facebook agrees Irish wind farm deal with Brookfield
5 Trump signs executive orders banning TikTok and WeChat
6 ‘Saudi Arabia is where the opportunities will happen in future’
7 Project Eagle: What was it and why is it in the news?
8 How your country’s history affects the way you think
9 More than 1,200 tracker mortgage complaints still awaiting ombudsman ruling
10 Marlet secures €65m from AIB for Dublin docklands build-to-rent scheme
Real news has value SUBSCRIBE