In the US and UK, the rich will get richer and the poor will get nothing 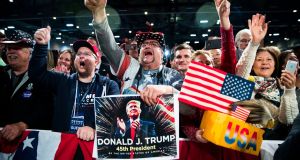 Trump supporters after the election. Half of all Americans have seen no real income increases since the 1970s. Photograph: Doug Mills/The New York Times 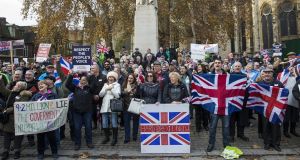 Mark Carney, governor of the Bank of England, is that rarest of creatures: a fascinating central banker. Brexiteers hate him because of his predictions of trouble for the UK economy arising from the decision to leave the EU.

The attacks on Carney by hardline Tory MPs have been vicious and personal. It’s no wonder that the governor clearly wishes to get back to his native Canada at the earliest opportunity. He personifies the “expert” so despised by everyone in power in Westminster.

In a remarkable speech, Carney recently laid out his thinking on what has gone wrong, the developments that have given rise to Brexit and Trump. The narrative is straightforward: rising inequality and stagnant real incomes have led to votes for those who promise change.

Nowhere is this a bigger problem than in the United States. Recent remarkable work by the doyen of inequality research, Thomas Piketty (and his associates), revealed that half of all Americans have seen no real income increases since the 1970s.

And another exhaustive trawl of the data by Raj Chetty of Stanford reaches a similar conclusion expressed in a different way: an index of the “American Dream” has been created which shows the likelihood of earning more than your parents has steadily fallen – collapsed might be a better word – over the past 75 years. Anyone born in 1940 was almost guaranteed to earn more than their parents. Today, the odds are actually against that happening.

It is probably no coincidence that we also learned this week that life expectancy in the US has actually fallen for the first time in many decades.

If the problem is easy to identify, the cure is less obvious.

There is debate over the most important drivers of all these trends but broad agreement over what they are. Globalisation – specifically international trade – technological change and the demise of trade unions are the main culprits. (Note that immigration never makes this list).

It is still the case, even in America, the land of student debt, that a college degree pays a financial dividend. So more and better education is always recommended. Half the US population doesn’t go to college. In the UK, nearly half of their population doesn’t get the equivalent of a Junior Certificate. It is no wonder that both countries have to import skilled and educated workers.

The basic idea is that we need to educate more in order to improve productivity. That’s a reasonable hope.

Of course, initiatives have been tried in many countries, not least the US and UK, to try and do exactly this. But the results have been mixed at best. The suspicion is that until significantly larger amounts of money are thrown at education, particularly early stage learning, nothing much is going to change. We starve Ireland’s education system of resources at our peril.

Stagnation of real earnings has been accompanied by booming company profits. That’s where the shrinking influence of trade unions comes in, although this is only part of the story. There isn’t much policymakers can do about this other than to tax profits more. This is not going to happen.

One interesting policy experiment in the US has some bearing on the wage story. Minimum wage hikes are happening, despite howls of protest from business and the Republican party. And there have been no bad effects on job creation.

This flies in the face of economic orthodoxy but the data is persuasive. And one clear policy recommendation emerges: gently increase the minimum wage until it does obvious harm. We may be surprised by the result. It’s something we should try here: do more on the minimum wage.

As Carney eloquently pointed out, all of this is a belated recognition that too many people have been left behind.

Economic growth has continued, albeit at an uneven and generally slower pace, but the benefits have gone to a narrow slice of the population. One or two economists, most US Republicans and UK Tories, think this is just a natural state of affairs: the nature of capitalism is that people usually get what they deserve, a function of their efforts and talents. The role of chance, circumstance and old-fashioned luck doesn’t affect this line of thinking.

Ireland should give thanks that it has no “rust belt” industries that foment all of the populist anger. Accidents of geography and history mean we have no car industry and similar jobs that might migrate to Mexico. We are buffeted by globalisation but have mostly benefited from it.

We have populist politicians of course, deploying all the tricks of social media and post-truthism, but the best they have been able to do is produce a revolt over water charges. Proper populism would see Sinn Féin taking out ads in the Daily Mail pointing out the £100 million a week that Northern Ireland costs the UK taxpayer while at the same time appearing on Prime Time with a list of how the Republic’s economy and public finances will be improved by reunification.

Carney and other experts rightly point to the need for more jobs (boost economic growth via fiscal stimulus), better paid jobs and a raft of measures that compensate the losers from globalisation. Retraining, education and higher minimum wages are essential. More contentiously, more redistributive tax and spending policies are also argued for, at least by Piketty.

Of course, virtually none of this is likely. About the only thing that looks possible is a US fiscal boost via tax cuts for the rich and tax breaks for corporations. The non-experts now running things on both side of the Atlantic will implement policies that will hurt the people who voted for change.

The hardline critics of Mark Carney envisage a UK economy as the bastion of global free trade. That this will accelerate manufacturing job losses is irrelevant expert opinion. But the simple truth is that some people need compensation for the effects of free trade, not more free trade.