EIB investment commitments in Ireland to top €1bn in 2017 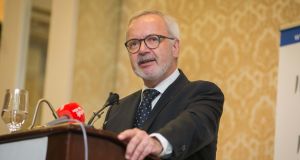 Funding commitments by the European Investment Bank (EIB) in Ireland are expected to top €1 billion for the first time next year, its president Werner Hoyer has said.

Mr Hoyer was speaking at the official opening of its new office in Dublin which is expected to strengthen links between the EIB, the world’s largest international public bank, and Ireland.

The EIB, the financial arm of the European Union, also announced the signing of a €50 million loan agreement with the Royal College of Surgeons in Ireland (RCSI) as part of a €106 million investment in the institution’s Dublin campus.

Overall, the EIB has provided low-cost loans amounting to €15 billion in Ireland since 1973, the bank’s president said. More than €3.8 billion has been given in the last three years alone for investment to improve education, transport, energy and water infrastructure and access to finance by small business.

Key infrastructure projects supported by the bank in recent years include Luas Cross City and the building of Terminal 2 at Dublin Airport. EIB also committed €100 million late last year to finance Dublin Port’s Alexandra Basin Redevelopment (ABR) project, which will deepen the navigation channel at the port to allow for bigger container and cruise ships.

Mr Hoyer also said the EIB, which is owned by EU member states, is expecting to invest in a large social housing project in Ireland next year.

It also includes a 540-seat auditorium, a library spanning three floors with 500 study spaces, a sports hall and a fitness suite.

The funding also includes a significant investment in the expansion of RCSI’s education and research centre on the grounds of Beaumont Hospital.

Taoiseach Enda Kenny described the opening of a permanent office in Dublin by the bank as an important milestone for both the EIB and Ireland.

“The strengthening of the relationship between Ireland and the EIB is particularly important at this critical time in our recovery. It is accepted that as our national finances continue to recover and our economy grows stronger that the Government and companies based in Ireland will need to focus more on capital investment in the years ahead,” Mr Kenny said.