Pilita Clark: Recovery will be greener than last one

Economic impacts of pandemic are unlikely to stifle environmental concerns 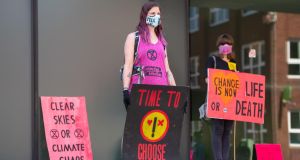 Last Friday was World Environment Day. Congratulations if you noticed. Even in an ordinary year, this UN-designated day can be overshadowed by events.

In this year of pandemic and protest it had little hope, which prompts a wider question: are the mushrooming efforts to stave off the great environmental threat of climate change about to be derailed?

When the coronavirus crisis first took hold, I was sure this would happen. The only figures that mattered were the ones that dropped into my inbox each day showing the latest Covid-19 death toll and how each country was faring in the fight against the virus. They were closely followed by data charting the crushing number of job losses and economic collapse.

These are still vital signs to monitor. But as the months have passed, another set of data has begun to pile up that will in time form an important ranking. It will show which countries – and companies – are using this crisis to deepen the drive against fossil fuels and which are not.

With at least $10 trillion (€8.9 trillion) in stimulus measures announced so far, a few entries on the green side of the ledger already stand out. Predictably a lot are in Europe, home to Greta Thunberg and flight-shaming.

Electric cars should be cheaper and easier to charge under France’s €8 billion auto sector recovery plan. Air France is set to slash domestic flights and cut its overall emissions as a condition of its €7 billion bailout. The EU says green policies will be central to its €750 billion recovery plan.

But Europe is not alone. Canada’s bailout money for big employers will only go to companies reporting climate risks to their business, using disclosure standards that have been largely voluntary until now. If this paves the way for those standards to become widespread and mandatory, it could help shift billions of investor dollars to greener ventures and firms.

Against this, the Trump administration is rolling ahead with efforts to reverse US environmental safeguards and the picture is mixed in China and many other countries.

So will the world end up looking more like the US or Europe? At least one prominent chief executive thinks even Europe will end up suspending climate action. “I suspect an awful lot of the environmental agenda and targets will be put on the backburner for a number of years,” says Ryanair’s Michael O’Leary. People will still care about the environment, the airline boss told a recent conference. But they will care more about “massive unemployment” and government indebtedness.

O’Leary has history on his side. Ahead of the last global recession just over a decade ago, he predicted the downturn would shift attention from the environment to unemployment.

In the event, only $1 in $6 was spent on sustainable infrastructure, says former Bank of England governor, Mark Carney, now an adviser on the next round of UN climate talks.

Those talks themselves add weight to O’Leary’s view. They were due in Glasgow in November, making 2020 a year when countries ramped up pressure on each other to cut emissions. The pandemic forced a delay until November 2021.

For what it’s worth though, I think O’Leary will be wrong about this crisis. Too much has changed since the last one. Green technology costs have fallen. Green job numbers have grown. Renewable energy companies alone employed 11 million people globally at the end of 2018, up from about 3.5 million in 2010.

Countries have agreed to compensate coal workers and other losers in the green energy shift. All this makes it much harder to argue climate action automatically costs jobs.

And it shows why those who did notice World Environment Day last week saw something else that has shifted since the last crisis. Hundreds of companies today either back the net zero emissions targets that have multiplied since 2018, or say governments should align recovery plans with those goals. That includes Rolls-Royce, BP, HSBC and Heathrow Airport. Ryanair is not there yet and O’Leary may speak for a silent majority. But the direction of travel is clear and it means this recovery will be shaped in a very different way to the last one.

1 How much do Irish people earn? And what will Covid-19 do to our wages?
2 Second Covid-19 outbreak and no-deal Brexit an appalling vista
3 Flights abroad ban could last all summer
4 Nine more suing INM and Leslie Buckley over alleged data hacking
5 Why are markets booming when a crash is on the way?
6 Ireland faces 'deep downturn' this year and may not rebound until 2024 if there is a second wave
7 Restaurants file court actions against insurers over lockdown losses
8 Columbia Sportswear defies gloom with first Irish standalone shop
9 Income tax receipts prove remarkably resilient to coronavirus
10 Stocktake: Playing poker with the day traders
Real news has value SUBSCRIBE