Majority on the register were male while 13.1% were under age of 25 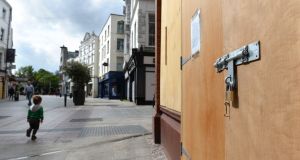 The live register hit 225,662 in May while the seasonally adjusted live register rose by 8,900 to 226,400 in the month, according to data released by the Central Statistics Office (CSO).

The data also shows that, in the last week of May, 543,164 people were in receipt of the pandemic unemployment payment while 436,344 people benefitted from the temporary Covid-19 wage subsidy scheme.

Neither of those emergency payments are captured in the traditional methodology of the live register which records the number of claimants for jobseekers benefit or jobseekers assistance.

Of the unadjusted live register, 55.4 per cent of people were male while 13.1 per cent were younger than 25.

1 Columbia Sportswear defies gloom with first Irish standalone shop
2 Restaurants file court actions against insurers over lockdown losses
3 How to further divide the economy using the wage subsidy
4 ‘The rental situation stops me moving back home’
5 Home or car: what’s the best use of my savings?
6 Why are markets booming when a crash is on the way?
7 David McCullagh announced as co-host of RTÉ Six One News
8 Brexit: System agreed for Irish goods to skip checks on UK trade
9 Nine more suing INM and Leslie Buckley over alleged data hacking
10 Drink tax row; no respite for Bewley’s; and mortgage U-turn at AIB
Real news has value SUBSCRIBE