Trade war between China, US poses risk to global growth 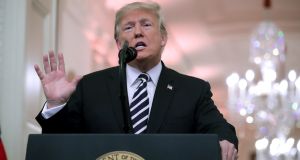 The International Monetary Fund said the world economy is plateauing as the lender cut its growth forecast for the first time in more than two years, blaming escalating trade tensions and stresses in emerging markets.

On the eve of its annual meetings in Bali, Indonesia, the fund on Tuesday projected a global expansion of 3.7 per cent this year and next, down from the 3.9 per cent projected three months ago. It was the first downgrade since July 2016.

While the global economy is still on track to match last year’s pace, which was the strongest since 2011, the new outlook suggests fatigue is setting in and the overall performance masked divergence with mounting weakness in emerging markets from Brazil to Turkey.

The fund left its 2018 US forecast unchanged but cut its expectation for next year, citing the impact of the trade conflict.

Risks to the global outlook have risen in the last three months and tilt to the downside, the IMF said. Threats include a further inflaming of the trade war between the US and countries including China, and a sharper-than-expected rise in interest rates, which would accelerate capital flight from emerging markets.

“There are clouds on the horizon. Growth has proven to be less balanced than we had hoped,” IMF chief economist Maurice Obstfeld told reporters Tuesday in Bail. “Not only have some downside risks we identified in the last WEO been realised, the likelihood of further negative shocks to our growth forecast has risen.”

The warning comes as finance ministers and central bankers from the IMF’s 189 member nations prepare to meet this week in Bali, Indonesia for the annual meetings of the fund and its sister institution, the World Bank. The Trump administration’s trade dispute with China is expected to be front and centre, as are the consequences of the Federal Reserve and other major central banks tightening monetary conditions after a decade of easy money.

The IMF’s cut to its outlook was broad-based. The fund downgraded its forecast for US growth next year to 2.5 per cent, down 0.2 percentage point from July, after factoring in the impact of tariffs imposed by the Trump administration and retaliatory duties by other nations. It left its US growth projection for this year at 2.9 per cent.

President Donald Trump has slapped tariffs on $250 billion in Chinese goods this year, and Beijing has retaliated with levies $110 billion of American products. The IMF projections don’t take into account Trump’s threat to expand the tariffs to effectively all of the more than $500 billion in goods the US bought from China last year.

The IMF also cut its outlook for China as a result of the tariffs, shaving its projection for growth next year to 6.2 per cent, down 0.2 point from three months ago.

The euro area will expand 2 per cent this year, down 0.2 point from July, as a result of weaker than expected growth in the first half of the year.

The fund upgraded its forecast for Japan slightly to 1.1 per cent growth this year, up 0.1 point from July.

The IMF said it expects inflation to accelerate around the world this year, due largely to increasing commodity prices. Core inflation, which excludes volatile items such as energy, will vary from country to country, it said.

In the US, the core personal consumption expenditure index, the Fed’s preferred measure for inflation, will rise to 2.1 per cent in 2018 and 2.3 per cent next year, as the government’s fiscal stimulus pushes growth above potential, the IMF said.

Over the longer term, the IMF sees aging populations and sluggish productivity growth as a major challenge to advanced economies. Global growth will slow to 3.6 percent by 2022-2023, as growth in rich nations falls back to potential, it said.

Most of the “meagre gains” from growth have gone to the well off, fueling support for protectionism and anti-establishment leaders, said Obstfeld. “Policymakers must take a long-term perspective to address this malaise. Inclusive fiscal policies, educationalinvestments, and ensuring access to adequate health care can reduce inequality and are key priorities,” he said. – Bloomberg