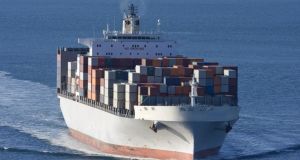 US tax reform plans could have been threat to Irish exports. Photograph: iStock

IDA Ireland has welcomed a decision by US policymakers to abandon plans for tax reform that threatened Irish exports to the country. Republicans announced they would scrap plans for a US border adjustment tax, an element of which was a levy on imports.

This would have hit Irish exports to the US with potentially serious consequences for the many US manufacturers based here, as well as affecting domestic exporters. Some 70 per cent of IDA client firms in Ireland are American and the plans would have had consequences in particular for the medical devices and pharmaceuticals sector.

It also threatened to undermine companies’ appetite to base themselves in the Republic with the incentive of a 12.5 per cent corporate tax rate.

In a statement on Friday, IDA chief executive Martin Shanahan said Ireland would continue to win business despite unpredictable political developments around the world.

Noting the US decision to set aside the border adjustability tax proposal, he said Ireland was a small, open globalised economy from which clients could conduct trade globally.

“IDA Ireland continues to win business despite the changing commercial and political worlds around us, helped in no small way by Ireland’s consistency and stability in the areas of taxation,” he said in a statement.

“Investors crave certainty and Ireland is providing that for them right now. Ireland remains stable and consistent in policy terms, which is a major plus when it comes to attracting investment.”

Peter Vale, a tax partner at accountancy firm Grant Thornton, said a number of companies choose Europe for reasons other than tax so the Irish position was never under considerable threat.

However, he noted there could still be a cut to the US corporate tax rate.

“Certainly the cut in the corporate tax rate would be a cost so obviously there had to be something on the other side but I still wouldn’t rule out a small cut to corporate tax.”

In any event, Mr Vale welcomed this week’s news, saying it was “broadly positive for Ireland” but cautioned that we’re not totally out of the woods because “there may yet be some type of reform”.

A Department of Finnace spokeswoman said: “At this stage, we have yet to see the substantive detail of any legislative proposal. The Department of Finance, and our embassy in the US, continue to monitor the debate in the US on tax reform.”

The aborted border tax policy also posed a long-term threat to foreign direct investment out of the US to countries such as Ireland as it would have provided a tax incentive for companies to export from the US rather than establishing plants overseas.