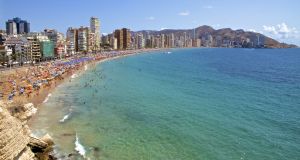 The Spanish resort of Benidorm is among those expected to benefit from growing tourist numbers as the national economy bounces back. Photograph: iStock

The Spanish economy accelerated at its fastest pace in almost two years, extending a recovery that shows no signs of abating.

Output grew 0.9 per cent in the three months through June after expanding 0.8 per cent in the previous quarter, the National Statistics Office said on Friday in a preliminary report.

That is the best reading since 2015 and matches the median estimate in a Bloomberg survey of economists. From a year ago, the economy accelerated 3.1 per cent.

While market consensus initially pointed to a slowdown this year, the Spanish economy continued to outperform its euro zone peers.

Renewed momentum has prompted string of GDP revisions from the International Monetary Fund, which now sees growth of 3.1 per cent for 2017 compared to a previous estimate of 2.6 per cent, and the Spanish government of Mariano Rajoy, which forecasts growth of 3 per cent instead.

That prediction is still too conservative according to economists at Banco Bilbao Vizcaya Argentaria and Bankia, who believe this will be the best year for the Spanish economy in a decade with output expanding 3.3 per cent.

The prospects of a continued recovery coupled with further budget consolidation has prompted SandP Global Ratings and Fitch Ratings to upgrade their outlook on Spain’s credit rating to positive from stable, hinting at a possible hike in the second half of the year.

Visitor numbers are on track to post yet another record year despite concern that Brexit will reduce the number of UK tourists.

“Household consumption has rebounded and that’s going to manifest in the quarterly data,” Miguel Cardoso, chief Spain economist at BBVA in Madrid said before the data were released.

“Exports are still strong despite coming off from a high point and the tourism sector is very dynamic, that’s having a positive impact on services.”

The latest health-check on the Spanish economy comes on the back of Thursday’s second-quarter unemployment report, which saw the nation’s jobless rate fall to the lowest level in eight years.

Retail sales data in June pointing to renewed impetus from consumers after spending lost some ground at the start of the year.

1 My aunt never told us that Gran passed away with no will
2 Green Party TD queries ‘usefulness’ of another appeal in €13bn Apple tax case
3 Government to push through €2bn credit guarantee scheme next week
4 If it’s safe to do so, could this be the time to spend for Ireland?
5 Brussels plans attack on low-tax member states
6 Owners of Cork shopping centre sue for €30m after car causes fire
7 Majority of employees don’t want to return to pre-Covid working patterns
8 The $6bn judgment pitting Nigeria against Irish businessmen
9 Datalex shares slide almost 24% as trading suspension is lifted
10 Covid anxiety among domestic holidaymakers could sink this summer
Real news has value SUBSCRIBE