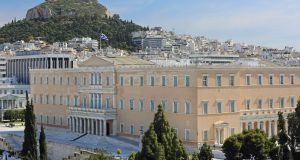 Greece plans to provide as much as €9 billion in state guarantees to help its banks reduce a mountain of soured debt weighing on their balance sheets, according to two people with knowledge of the matter.

The initiative, similar to a successful programme used in Italy, depends on antitrust officials in Europe ruling that it doesn’t constitute illegal state aid. A decision by the European Commission is expected over the next few weeks, the people said, asking not to be identified because the discussions are private.

Banks in Greece, Europe’s most indebted country, hold some €75 billion in soured debt, boosting costs for provisions and restricting their ability to generate new loans. The guarantee programme, known as an asset-protection scheme, could cut that down by at least €20 billion, the government estimated when the plan was first floated about a year ago.

The programme will allow lenders to use government guarantees to back the securitisation of bad-loan portfolios, according to the people. The soured debt will be transferred to a special-purpose vehicle that will issue senior, mezzanine and junior bonds. The senior debt will be guaranteed by the government and will remain on the banks’ books.

The commission is in contact with Greek authorities on an asset-protection scheme, a commission spokesman said without elaborating. A Greek government official declined to comment.

Italy’s bad-debt programme, known as GACS, caused securitisations to surge, reaching a record of more than €65 billion last year. That figure is expected to decline in 2019 as fewer loans are classified as non-performing. Greek banks managed to trim their bad loans from €81.8 billion at the end of 2018.

While the Greek proposal was initiated by the previous government, Kyriakos Mitsotakis, who took over as prime minister two months ago, has made it a priority to finalise negotiations before a new European Commission assumes office in November.

Greek banks will have at least 18 months to use the programme, according to the people. Among the details yet to be clarified is the total amount of bad debt that will be subject to the scheme, a person said.

It’s not clear yet how long it would take for the banks to start using the new scheme if it’s approved. If banks don’t already have a securitisation plan ready, they may need from six to 12 months before the transactions via the APS can begin. One official said the fees that banks must pay for the scheme may reduce the incentive to actually use it. – Bloomberg