Scramble for cash prompts second such move this week 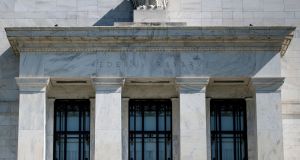 The Federal Reserve building in Washington.

The Federal Reserve is poised to inject billions of dollars into the financial system in its second intervention this week after a scramble for cash sent shockwaves through a key part of the US money markets.

The New York Fed said it would offer up to $75 billion (€68 billion) in short-term cash in an auction on Wednesday. It came after the central bank was forced into a similar operation on Tuesday after a severe imbalance in the so-called repo market sent the cost of borrowing cash overnight, known as the repo rate, surging to a historic peak.

The Fed had not previously used its repurchase agreement auction mechanism outside of small tests since the financial crisis in 2008 and encountered a hiccup on Tuesday as it attempted to open the facility for a large-scale operation.

“US funding markets were shocked this week as a combination of factors reduced the amount of cash available to fund securities positions,” said Alex Roever, head of US rates strategy at JPMorgan Securities, one of the two dozen primary dealers that act as trading counterparties for the Fed.

Analysts said the Fed’s dramatic intervention should be seen as a valve meant to release pressure on the repo market, in which banks and funds provide cash in exchange for Treasuries and other securities in transactions that reverse overnight.

Wednesday’s operation and this week’s market ructions come as policymakers on the rate-setting Federal Open Market Committee are meeting in Washington. The central bank is expected to reduce its main policy rate by a quarter of a percentage point as it seeks to stimulate the economy in face of growing global headwinds.

Highlighting the importance of the repo market to financial stability, Mr Roever said that while the money markets were functioning normally, the sharp rise in the repo rate had reverberated elsewhere, such as the short-term corporate borrowing market known as commercial paper, on Tuesday.

Joseph Abate, a managing director focusing on money markets at Barclays Capital, another primary dealer, said that a combination of “temporary pressures” had struck the crucial portion of the financial system in recent days.

Analysts specifically pointed to corporations pulling billions of dollars out of money market funds, which are typically major providers of cash in repo transactions, ahead of tax deadlines as a key component of the shock. It had been exacerbated, they said, by a flood of Treasuries hitting the market, something that sharpened dealers’ demand for cash via repo transactions.

Banks, which typically step into the repo market, also made less cash available because of a decline over the past several years in their excess reserves, said Mr Roever.

Given the short-term nature of repo transactions, analysts said, the cash being made available by the Fed should not be seen as a loosening of monetary policy or a cumulative injection of cash into the market.

“[The repo] operation says that the Fed is watching the markets and is willing to intervene on a temporary basis if conditions warrant,” said Mr Roever. He said the recent bout of volatility in the repo markets would “almost certainly” be a topic at the FOMC meeting, which concludes on Wednesday.

Money market analysts will also be looking for clues on whether the Fed plans to make the repo auctions a regular occurrence, or whether the bank will take other actions aimed at stabilising the market.

Mr Roever warned that this week’s events may be a “prequel to what could come at year-end when US banks significantly reduce their footprint in the money markets” to manage certain regulatory capital levels. – Copyright The Financial Times Limited 2019