Investors have been selling Italy’s bonds and equities 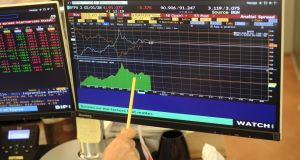 Italian stocks dropped on Tuesday with the benchmark index, the FTSE MIB, down 3 per cent.

Italy’s bond market suffered a steep sell-off on Tuesday, sending the yield on the country’s two-year bond to the highest level in more than four years as concerns about political turmoil in the euro zone’s third-biggest economy intensify.

The yield on two-year Italian debt broke through 2 per cent for the first time since 2013, reaching as high as 2.442 per cent — up more than 1.5 percentage points from Monday’s market close. The yield on 10-year debt hit 3.388 per cent, up 70bps from the previous close. Yields rise when prices fall.

Investors have been selling Italy’s bonds and equities after the country’s president, Sergio Mattarella, frustrated a bid by the Five Star Movement and League to form a coalition government. Investors fear that his move will trigger new elections that might give a more explicitly Eurosceptic mandate to the two populist parties.

Italian stocks also dropped on Tuesday with the benchmark index, the FTSE MIB, down 3 per cent.

Ignazio Visco, the governor of the Bank of Italy, warned on Tuesday that the country was “a few short steps away” from losing the “asset of trust”.

“The rules of the game can be debated, even criticised; they can surely be improved. Yet we cannot disregard constitutional constraints: protecting savings, balancing the accounts and respecting the [EU] treaties,” Mr Visco said in his annual speech on the state of the Italian economic and financial system.

After spending much of 2018 disregarding the risks of political turmoil in Italy, investors have rapidly reassessed that view as Five Star and the League moved to form a coalition government.

This bid was dropped after Mr Mattarella blocked the nomination of an avowedly Eurosceptic finance minister, Paolo Savona, in a dramatic stand-off on Sunday. Mr Mattarella, who has the power to approve or block cabinet appointments, considered Mr Savona a threat to Italy’s position in the eurozone.

The president has turned to Carlo Cottarelli, a former IMF official, to form what is expected to be a caretaker government.

Mr Cottarelli attempted to deliver a soothing message to markets, although he is not expected to win a vote of confidence. That would trigger fresh elections by the autumn.

“The Italian economy is still growing and public finances are under control,” he said, before alluding to Europe policy, the cause of the confrontation between Mr Mattarella and the populist parties. “Dialogue with the EU to defend our interests is essential and we can do better [but] it has to be constructive.”

Mr Mattarella’s decision has raised investor concerns that anti-establishment parties in Italy and elsewhere will be emboldened. Luigi Di Maio, the Five Star leader, called for a mass protest on June 2, a national holiday. “Last night was the darkest in the history of Italian democracy,” he said on Monday.

In a sign of investors’ nerves, the gap in yield between Italy’s 10-year bond and German Bunds of the same maturity, a key measure of perceived risk of Italian bonds, climbed to 310bps, up from 234bps on Monday.

The weakness in Italian markets has begun to feed through into other eurozone periphery nations’ debt yields. The 10-year Portuguese yield is up 31bps; the Spanish equivalent saw a 14bp move on the day.

Selling also hit the currencies market, with the euro slipping 0.89 per cent. It traded below $1.16 for the first time since November 2017.

While Mr Visco did not name Five Star or the League, many of his warnings seemed aimed at them. He stressed the importance of reducing Italy’s large debt ratio, after Five Star and the League proposed lavish tax cuts and spending plans.

“We are not constrained by the European rules but by economic logic. Closely linked to this is the obligation not to compromise the future of the next generations – increasing the debt means saddling them with what we are unwilling to pay today,” Mr Visco said.