Italy turmoil and trade rhetoric cause uncertainty on Asian markets

Italy plans to sell €6bn in bonds this morning, providing a timely clue to market sentiment 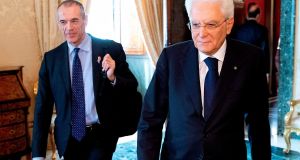 Uncertainty over Italy’s future government combined with concerns over bullish rhetoric from the US and China over trade hit Asian markets early this morning.

Italy is struggling to form a government more than two months after its last parliamentary election and fear that populist parties could turn a repeat poll into a de facto referendum on euro membership have sent yields surging in Italy’s €1.6 trillion bond market on Tuesday.

Italy’s prime minister-designate, Carlo Cottarelli, is due to meet president Sergio Mattarella on Wednesday. Both men met on Tuesday, where Mr Cottarelli had been expected to present a list of proposed ministers. However, he left the meeting without a word.

On Wednesday morning the nation’s debt office plans to issue up to €1.75 billion euros five-year bonds, €2.25 billion of 10-year debt and €2 billion of 2025 floating-rate notes.

The bidding deadline is 10 am in London, with results due about 30 minutes later. The five- and 10-year offers will be particularly in focus, with the maximum supply seen as equivalent to a combined 24,470 Italian bond futures or €2.5 million of risk per basis point move.

The auction could still sail through, given potential support from a bond redemption of €18.5 billion due on Friday. Intesa Sanpaolo SpA is the largest investor in that security, and domestic lenders typically reinvest maturity proceeds. Also, investors may take use the sale as an opportunity to buy in larger sizes than afforded in secondary markets.

Japanese banks — which invest heavily in global sovereign bonds and are sensitive to price drops in the securities — were hard hit. On Wednesday Tokyo’s benchmark Topix index was down 1.5 per cent with financials falling 2 per cent as all sectors lost ground. - Reuters/Bloomberg/Financial Times Service