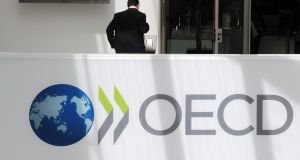 The OECD said the Central Bank’s lending caps may need to be “extended if necessary”. Photograph: Getty Images

Signs of overheating have begun to emerge in the Irish economy, the Organisation for Economic Cooperation and Development (OECD) has warned.

While the Central Bank’s loan-to-value and loan-to-income lending caps had reduced the share of risky loans, it said these may need to be “extended if necessary”.

The OECD warned of another potential property bubble on foot of rising house prices and rapid credit growth.

“Property prices may increase more strongly, which would boost further construction activity in the near term but may induce another property bubble associated with a strong surge in credit growth,” it said.

“Persistently high private indebtedness” also posed a serious downside risk to Ireland’s economic outlook, as it left the Irish economy sensitive to rising interest rates, which are expected to begin rising in Europe next year.

In its report, the OECD noted that the Government’s budgetary policy would be mildly contractionary in 2018 and 2019, but said it needed to keep improving its fiscal position to create a buffer against future economic shocks, most notably Brexit, which posed a significant threat to Ireland’s economic outlook.

The State needs to leave room to use fiscal policy to support for growth as a counterbalance to the potentially “strong negative impact of Brexit at the end of the transition period in 2021”, it said.

This would require various national infrastructural projects “to be carefully prioritised”.

The OECD said economic acitivity here would remain robust in the near term, fuelled by “solid employment growth and consumption”, before gradually easing.

It noted that wage pressure had risen in tandem with the rapid decline in unemployment but inflation had been kept in check thanks to the appreciation of the euro against the pound sterling in the wake of the Brexit vote in the UK.

It said the effects of sterling’s depreciation would eventually dissipate with wage pressures feeding through to higher inflation.

Meanwhile, the OECD said global growth is expected to hit 3.8 per cent this year, nudging up to 3.9 percent in 2019.

However, the prospect of a trade war is threatening the global growth outlook, which otherwise is on course for a 40-year low in unemployment, the OECD said.