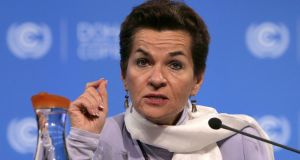 Speaking at a sustainability seminar hosted by AIB, Ms Figueres said an extension of the current US administration would not stop global decarbonisation, but it would slow it down.

“Given that we have a huge delta between decarbonisation pace and decarbonisation need it is in everybody’s interest that that pace be accelerated and not slowed down,” she said.

Ms Figueres said if the world does not halve greenhouse gas emissions by 2030, there will be “an abrupt” and irrevocable change in many of the world’s habitats, one that will have dire consequences for the human population.

Ms Figueres is a former executive secretary of the United Nations Framework Convention on Climate Change. It was Figueres and her team that brokered the 2015 Paris climate accord.

Mr Trump’s decision to withdraw the US – the world’s biggest source of historical emissions – from the multilateral agreement has cast doubt on whether on the 2030 target will be achieved.

Ironically, the letter formally withdrawing the US from the accord is due to be delivered on Tuesday, the day of the US election, with Mr Trump seeking re-election ahead of the Democratic Party candidate Joe Biden.

Ms Figueres said the US had the largest, most competitive, most innovative economy in the world and “it would be a crime” not to unleash this potential in the fight against climate change.

“If ignited, the US can move the needle in ways that other countries cannot,” she said.

She also warned that the US would lose out in terms of global competitiveness by not leading on climate change.

Ms Figueres said a win for Mr Biden in the election could be a game-changer in the global effort to de-carbonise economies.

If elected, Mr Biden said he would spend $2 trillion over four years to escalate the use of clean energy in the transportation, electricity and building sectors, and pivot the US economy away from fossil fuels such as oil and gas.

“It’s undeniable that many countries still look to the US for leadership and that’s why so many countries have been disappointed over the last four years,” she said.

On the current European debate about whether the current 2030 target to cut the bloc’s emissions by 50 per cent should be increased,

“Whether it is 50 per cent or 65 per cent or somewhere in the middle, it has to be be uncomfortably ambitious in order to break through status quo thinking,” she said.