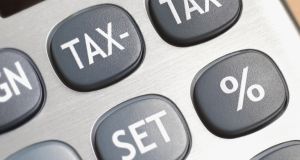 The Taoiseach’s pledge to raise the threshold at which the higher-rate income tax applies to €50,000 will cost €2.3 billion.

The Government’s pledge to raise the threshold at which the higher-rate income tax applies to €50,000 will cost €2.3 billion, according to the Department of Finance’s tax strategy group.

The group, which publishes a number of reports each summer aimed at informing budgetary policy, said there has been a lot of commentary around the competitiveness of the Irish income tax regime, specifically the entry point at which earners pay the higher 40 per cent rate of income tax.

For a single worker this higher rate kicks in at incomes above € 35,300, which is 10 per cent below the average industrial wage.

The number of workers paying income tax at the higher rate has more than doubled since 2010 to 576,500.

Taoiseach Leo Varadkar pledged to raise the entry level to the higher band to €50,000 for a single person and €100,000 for a double-income couple on a phased basis over five years in an address at the Fine Gael ardfheis last year.

Preliminary estimates put the cost of this policy at €2.3 billion if it was implemented in a single year, the group’s paper on income tax said. This estimate would be subject to review in each budget year to take account of updated data, including employment and income growth, it said.

If done in stages, the group said that a €3,000 increase to all standard rate bands in one year would cost €524 million in the first year, and €610 million in a full year.

It also suggested that raising the threshold for the higher 4.5 per cent rate of universal social charge (USC) would ease the tax burden on low to middle income earners.

The departmental group also noted that the current Pay Related Social Insurance (PRSI) regime was lower than than those charged in other countries, and that consideration should be given to a phased increase in PRSI contribution rates over a five to 10-year period, with annual increases of a quarter or a half percentage point. Depending on the increase chosen, that would raise either €200 million to €400 million, which could be used to fund USC cuts.

In a separate paper on climate action and tax, the tax strategy group suggests the Government could raise an additional €216 million in revenue by increasing the carbon tax from €20 to €30 per tonnne of emissions in the budget. A rise to €40 would would bring in €430 million.

The Government’s climate action plan lays down an annual trajectory that would see the tax increase to €80 by 2030. To meet this target, the group proposes a €10 per tonne increase in the October budget and a €5 increase every year thereafter.

The department noted the predominant view from a recent public consultation that the additional carbon tax revenues should be ring-fenced for the purposes of enhancing the current Sustainable Energy Authority Of Ireland (SEAI) grant scheme for household energy efficiency improvements and to fund sustainable transport infrastructure.

Consideration should also be given to further increasing the rate of commercial stamp duty, which Minister for Finance Paschal Donohoe controversially trebled to 6 per cent in 2018. Concern that this would dampen investment in the commercial property sector here have proved unfounded, the department said, noting a further 1 per cent hike could raise another €94 million in annual revenue.

Food supplements, which amounted to a €60 million market in 2016, according to Revenue, are also likely to come under the VAT regime in the October budget. The tax strategy group confirms that there is no legal basis in the EU to zero rate such supplement s as has been done in Ireland for many years.