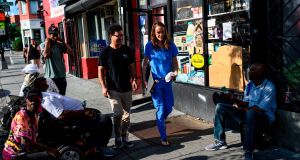 Eleven of 13 major retail categories in the US increased, led by a 1.7 per cent increase in nonstore retailers, which include online vendors. Electronics and appliance stores and gasoline stations both fell.

US retail sales exceeded projections in June on broad gains across most categories, indicating consumption was already healthy before an anticipated interest-rate cut this month.

The value of overall sales rose 0.4 per cent after a downwardly revised 0.4 per cent increase the prior month, Commerce Department data showed .

That compared with a projected gain of 0.2 per cent in Bloomberg’s survey of economists. The 10-year Treasury yield and the dollar advanced after the report.

The rebound in sales underscores Fed chairman Jerome Powell’s view that consumer spending and finances remain healthy amid a tight labor market that’s been supporting the expansion. Strength at retailers may also complicate the debate for policy makers as they gather July 30-31 to chart their course amid growing headwinds from slowing global growth to trade tensions.

Mr Powell in congressional testimony last week left it all but certain that the Fed is poised to cut rates for the first time in a decade. Still, he told lawmakers that consumer spending has reliably driven growth and rebounded to a solid pace after first-quarter weakness.

The initial reading of second-quarter gross domestic product is due July 26. A survey this month showed growth probably slowed to a 1.8 per cent annualized pace from 3.1 per cent , though consumption was seen picking up.

Eleven of 13 major retail categories increased, led by a 1.7 per cent increase in nonstore retailers, which include online vendors. Electronics and appliance stores and gasoline stations both fell.

Filling-station receipts decreased 2.8 per cent , the most since December, as gasoline prices fell a second month. The figures aren’t adjusted for price changes, so lower retail sales in the category could reflect changes in gasoline costs, sales, or both.

Sales at automobile dealers climbed 0.7 per cent , the same pace as the prior month. Industry data from Wards Automotive Group previously showed unit sales unchanged in June after a May rebound. – Bloomberg