John FitzGerald: Have Eircodes made Santa’s job easier? And other bah humbug observations 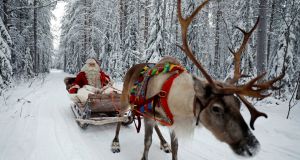 It is proving extremely difficult in the aviation sector to find technological solutions to greenhouse gas emissions that influence climate change. As a result, flying may be the last sector staying with fossil fuels.

However, Christmas each year tests an alternative approach. The sleigh driven by Santa Claus is powered by nine reindeer. Like cows, reindeer are ruminants: when they digest grass and lichen, they emit methane gas. Unfortunately this is a very powerful greenhouse gas. On the face of it, this would appear to be a black mark against reindeer-powered sleighs.

However, we should also consider how much greenhouse gas is emitted per tonne of payload per kilometre travelled, and how that might compare with alternative modes of travel. Given that the sleigh is believed to traverse the entire globe over the course of just one night, the number of kilometres travelled is very high.

While one of Santa Claus’s competitors, Amazon, is experimenting with pilotless drones for delivering parcels to front doors, they don’t really provide an effective alternative to the sleigh

In addition, it is also understood that, not only does the sleigh visit almost all the world’s chimneys, but increasingly it also visits many A-rated homes built without chimneys at all. Even with a small payload for delivery to each destination, because good children are not greedy about what they ask for, over such a huge number of deliveries, the weight will add up.

So when the gas emitted over the 24 hours of travel is divided by the tonnage multiplied by the kilometres travelled, the unit of greenhouse gas emitted per delivery is very small.

While one of Santa Claus’s competitors, Amazon, is experimenting with pilotless drones for delivering parcels to front doors, they don’t really provide an effective alternative to the sleigh, having nowhere near the range or the carrying capacity of the standard reindeer-powered sleigh.

Under EU and UN accounting rules, every country has to report annually the greenhouse gases emitted. Thus each year Ireland reports on the emissions from ruminant animals, including cattle, camels – and reindeer. While the accounting rules sound straightforward, globalisation gives rise to certain complications.

If reindeer sleighs are treated as international aviation, the resulting emissions are not included in the agreed targets for 2020 and 2030 for individual countries. However, if each journey from chimney to chimney in Ireland were treated as a domestic flight, the emissions would count towards the national target. On balance, as the flights are said to begin at the North Pole and end there, the international aviation rules for counting emissions should apply.

The volume of domestic deliveries on Christmas night is also affected by the number of separate chimneys (or alternative entrances) that must be served, as well as by the number of children, which affects the total payload of the sleigh. The 2016 Census shows about 400,000 households have children under 15, about the same as 2011, but falling family size can affect economies of scale in delivery.

While the Growing Up in Ireland Survey fails to record the appropriate age-cut off, we know the number of under-eights has fallen very slightly since 2011 to 548,000. This is set to drop further in future, given the birth rate has fallen steadily over the last eight years and is now at 85 per cent of its 2009 peak.

However, more children are now living in towns, making deliveries more efficient. We don’t know yet if Eircodes have made Santa’s job easier.

Increasing desertification, combined with the loss of polar ice, could put pressure on Santa to switch to camel-powered flight

While this Christmas delivery service has been in business for aeons, global warming is putting its future at risk. Research shows that the extent of Arctic ice in the winter is rapidly declining each year, due to the continual rise in temperature in these regions driven by climate change. While still adequate for sleighs to take off and land today, in 20 years time this may no longer be possible. As the depth of ice is reduced by global warming, the take-off weight for sleighs in Arctic regions may be steadily reduced under international aviation regulations.

This could give rise to serious disappointment in future years as deliveries will have to be curtailed.

Increasing desertification, combined with the loss of polar ice, could put pressure on Santa to switch to camel-powered flight. This could be seen as unfair double-jobbing, given camels already have a role in bearing gifts and wise men. Taxes on emissions could, however, help fund redundancy payments for Rudolf and friends.

But maybe the best Christmas gift of all for today’s and tomorrow’s children could be effective action to tackle climate change through implementing the Paris Agreement. May all our North Pole Christmases be white.