Go easy on the West Coast Coolers and time the drive Down Home carefully: some practical advice from a sensible Irish girl 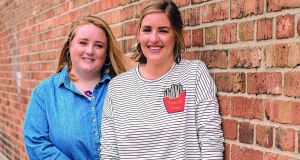 Emer McLysaght and Sarah Breen, authors of ‘Oh My God, What a Complete Aisling: The Novel’. Photograph: Nathalie Marquez Courtney

Take it handy at the office party

The girls in work are always complaining about having to go to the Christmas party but truth be told I look forward to it. A three-course meal in a swish hotel with drinks included? You’d be mad to miss it. Majella had to go on a team-building assault course with 10 other teachers last year – she ended up in St James’s with a cracked rib. And sure the Secret Santa is gas craic, even though I always seem to get the boss. Learn from me and go easy on the West Coast Coolers though – last year I had be put in a taxi because I lost the head when the DJ said he had no Michael Bublé. I was bulling. Bublé IS Christmas.

Time the drive Down Home carefully

The traffic out of Dublin on Christmas Eve would put years on you. I usually work a half-day and wait to leave till about three o’clock when there’s a bit of a lull. That gives me the chance to do a last-minute skite around Marks & Spencer for a few bags of notiony crisps. I’m normally very much against any flavour that isn’t cheese and onion but sure we all go a bit mad in the festive season, don’t we? Once I hit the N7 I put the foot down and turn up the radio, imagining I’m Alan Hughes in that ESB ad from years ago.

Pull out all the stops on Christmas Eve

Midnight Mass on Christmas Eve is always very glam, especially since they moved it to eight o’clock. It means I can meet the girls afterwards in the local and still get home at a reasonable hour, although I must remember not to horse into the smoked salmon when I come in. There were ructions in 2011. Maguires will be hopping, of course – if Eamon feels you’ve been a loyal customer you’ll get the coveted free Christmas drink. It’s a good night to show off too, which is why I’ll be unveiling the Michael Kors bag John bought me for my birthday. The only downside is trying to avoid the lads I shifted in secondary school. Ghosts of Christmas past.

If your garage doesn’t look like an off-licence on Christmas morning, are you even Irish? We usually get the first batch of visitors straight after Mass

It’s never too early for alcohol

If your garage doesn’t look like an off-licence on Christmas morning, are you even Irish? We usually get the first batch of visitors straight after Mass so I’ll be on duty passing around the tea, Baileys, whiskey, cans of Guinness and what have you. I floated the idea of doing mimosas this year – very popular in Dublin – but Mammy couldn’t get her head around the concept. The same thing happened when I tried to explain brunch; they’re just not ready.

Pace yourself with the food

I promised Weight Watchers Maura I’d maintain this week but I couldn’t look her in the eye when I was saying it. I like to start the day complaining about the state of modern selection boxes. Where did the Curly Wurly go? Only 2 Points in a Curly Wurly, you know. Then we’ll have the dinner around three. I must remind Daddy to go easy with the crackers – he dragged Granny across the room last year and nearly dislocated her shoulder. And all for a paper hat and a tiny deck of cards. I ask you. After the pudding (I mean Christmas pudding obviously, not dessert. I’m not Protestant) we’ll throw an eye to the soaps before breaking out the old Discover Ireland. May the best man – or woman – win.

Shop till you drop

I know it’s morally wrong, but I can’t resist the Stephens’s Day sales. The bargains are just too much. And, if I’m being honest, I’m usually looking for an excuse to get out of the house after I’ve made the turkey curry. (It wouldn’t be Stephens’s Day without a turkey curry, never mind what Nigella says.) I’ll be after a new going-out top to wear with my navy bootcut jeans, and maybe some good boots. Nothing with too high a heel though, because we’ll be going Out Out later on and I intend to be still on the dancefloor when the national anthem comes on and the lights go up. I’m sure it’s what St Stephen himself would want. Merry Christmas!

Emer McLysaght and Sarah Breen are the authors of Oh My God, What A Complete Aisling (Gill Books, €14.99)