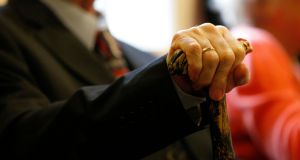 Pensioner prediction: the numbers aged over 65 are set to more than double by 2046, according to CSO projections. Photograph: Jonathan Brady/PA Wire

At a time the economy was booming, the National Pension Reserve Fund was established in 2001, taking up a proposal by Prof Philip Lane to plan ahead for future growth in the numbers of pensioners.

By saving in advance, the current generation could ensure that balancing the generosity of pensions with their affordability would not be a major dilemma for future taxpayers.

The National Pensions Reserve Fund (NPRF) was set up with the proceeds of the privatisation of Eircom. Each subsequent year, the government contributed a further 1 per cent of GDP to it. As a result, by 2007 the fund was worth around 12.5 per cent of GNP.

If things had continued as planned, by 2030 the fund would have reached 40 per cent of GNP and it would have been able to smooth increased expenditure on pensions.

However, things did not go as planned and the financial crash began in 2008. With a massive budget deficit the government no longer had the ability to add to the fund. Instead, the NPRF was put to a new and unforeseen use in propping up the State.

As the crisis deepened, the government found that the need to fund the huge deficit and the capital needs of the banking system resulted in rapidly rising interest rates. However, along with its cash reserves, the NPRF investments were a major shock absorber: as the NPRF investments were mainly in foreign stocks and shares, they could be sold easily on world markets to help funding. However, even this cushion did not prove enough for Ireland to avoid the bailout of December 2010.

Much of the assets of the NPRF were sold over the course of the crisis and the money was reinvested in what was termed the Directed Portfolio – propping up the banks. These were investments which would not have been justified on a commercial basis but were necessary to protect the economy.

As we have exited the crisis, these investments in the banks are being sold off and, by the end of the decade, the State will get back much of the investment in Bank of Ireland and AIB.

We are now returning to more normal times and what remains of the NPRF has been folded into the Irish Strategic Investment Fund (ISIF).

The Government also plans to add 0.5 per cent of GDP each year to a rainy day fund. However, with a calmer economic environment, the question must be asked what should be the role of the ISIF and what investment policy it should pursue.

Before the crisis, there was an argument that the State should not start an investment fund till it had paid off its debt. However, the experience of the crisis showed that the NPRF had an additional important value as a shock absorber for the State when borrowing proved difficult.

Currently the remit of the ISIF is to invest in Ireland on a commercial basis in a manner designed to support economic activity and employment. However, there are a number of strong arguments why this remit should be changed.

Firstly, there is no evidence that there is a significant shortage of finance for sustainable economic development projects in Ireland. Even in the crisis years, the problem was more that firms did not wish to expand rather than that they could not get funding. Thus this role of funding domestic commercial investment seems superfluous.

Secondly, the current investment mandate is completely inconsistent with the fund’s role as an emergency reserve for the State. If the NPRF had invested heavily in Irish bank shares before the crisis, there would have been nothing left when those shares became valueless. To be a successful shock absorber for the State, the funds should be invested outside Ireland.

Finally, if the fund is to successfully offset the rising costs of ageing, it will need to invest as profitably as possible. This argues for a diversified portfolio of investments with limited exposure to the Irish economy.

Thus a return to the original strategy of the NPRF of diversifying their portfolio outside Ireland seems warranted.