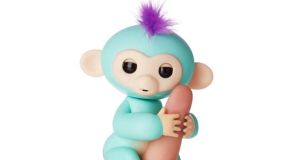 With retail sales growing at 4.5 per cent year on year, Fingerlings are this Christmas’s craze toy.

Try this for a seasonal brain teaser: what are small and brightly coloured, cling to fingers and are frightening the life out of grown men on both sides of the Atlantic ocean? No, it’s not their wedding rings. The correct answer is Fingerlings – tiny, collectible robotic monkeys that are apparently this year’s Christmas craze toy.

Fingerlings appear to be sold out in Ireland, Britain and the United States, as well as through official online retailers such as Amazon. If you are the father of a young girl who has asked for one, this is the definition of the Nightmare Before Christmas.

The lengths some people – okay, me – have been prepared to go to in order to secure one are illustrative of how enthusiastically Irish consumers have thrown off the shackles that had been holding back consumer spending. This Christmas, the lesser-spotted Irish consumer is well and truly back – quite literally with bells on.

Fingerlings – which hang by their tails, react to sounds and blow you kisses – are not expensive: just €17.99 in their official, and sold-out, Irish distributor, Smyths. Their affordability is at the heart of the craze, with demand everywhere far outstripping supply. Chinese factories are knocking out tonnes of dreadful fakes to capitalise on the panic, swamping third-party marketplaces on sites such as Amazon and Best Buy.

On Monday afternoon, I had never heard of a Fingerling and was blissfully unaware of the impending danger. A rookie mistake. By Tuesday morning, hours after my six-year-old had finished her wishlist for You Know Who, I was tearing my hair out at the realisation that one of these five-inch cooing robots would be harder to procure than a Brexit border agreement.

By Tuesday afternoon, I was so desperate for a backstop to insure against disappointment that I ordered a pink one from a dodgy reseller in the US at an inflated price on Amazon. The packaging looked authentic in the picture, but in reality I didn’t care. Including import duties and expedited delivery charges to get it here on time, this infernal thing was going to set me back €90.

The daughter who blindsided me with the Fingerlings request was born in the middle of negotiations between Fine Gael and Labour to form the recession-era government of 2011. At any other time in her life so far, I would have baulked at binning cash simply to keep up with a stupid craze. Yet, here I was, paying more than four times face value for what, in all likelihood, was a fake monkey robot.

Retail sales are growing at 4.5 per cent, unemployment is hurtling towards the pre-crash floor level, and consumer confidence is no longer an oxymoron. Retail Ireland, a division of Ibec, predicts each household will spend an average of €2,654 this Christmas, with retail sales set to rise 2.6 per cent to top €4.5 billion.

My Fingerlings stupidity is just one anecdotal example of the ensuing frothiness creeping back into parts of the retail economy, and the resurgence of rampant consumerism this year.

Here is another: 10 days ago, we tried to book a trip to bring our kids to see Him at the same country house estate on the outskirts of Bray that we blithely visited last year. Except it was completely booked up, and had been for a long time. A friend had a coveted slot. We asked her when she had booked it. “September,” she replied.

There are other signals of renewed consumerism everywhere. A Victoria’s Secret lingerie shop opened in Dublin on Tuesday, and there were 500 people queuing around the block to get in the doors at 10am. Last month, the new Bewley’s cafe reopened on Grafton Street and there have been lengthy queues to get inside at peak times ever since. For buns and mediocre coffee.

On Wednesday’s Today with Sean O’Rourke on RTÉ Radio 1, he played an item with broadcaster Paddy O’Gorman, who had been speaking to women on Tuesday collecting their “children’s allowance” from the post office in Bray. One single mother to three children had taken out a loan with subprime lender Provident of €1,000 to pay for presents including the latest iPhone for her 10-year old. The loan will cost €1,500 to repay.

The next woman O’Gorman encountered, a working single mother of one, is spending €2,200 on her 12-year old for a new iPhone, laptop and bicycle. She explained that she has about 40 nieces and nephews, and is giving all of them money for Christmas. The under-18s will get €30 in a card, while the over-18s will get €50. In total, she is spending more than €1,000 on card presents and more than €4,000 on Christmas overall. It is her own money. She has clearly worked hard for it. But has she lost her mind?

An epilogue to my Fingerlings sob story. At 9pm on Tuesday I checked the Smyths website again and a small cache of €50 box sets containing two of the damned monkeys on a swing had mysteriously just come back in stock in Jervis Street. The rest were still out of stock. I tore across town to secure my prize, before cancelling the Amazon panic purchase before it shipped. Smyths says it “might” get more of the normal Fingerlings in the week before Christmas, but they will sell out immediately.

My panic is over. Regardless, Christmas shopping this year feels a lot like 2006.

Oblivious to my impending retail panic, on Monday evening I was among a group of business journalists who gathered for a social event in the landmark McDaid’s pub off Dublin’s Grafton Street.

Later in the evening, Deirdre Foley, the property developer who fronted the Clerys deal, arrived into the pub with two companions. All seemed in good spirits, although Foley presumably hadn’t banked on running into a bunch of financial reporters. Who could blame her.

Perhaps she was boosted by the news earlier in the day that the most serious of the charges taken against her by the State over the Clerys affair – that of allegedly impeding a Workplace Relations Commission inspector – has been dropped.

She still faces trial on three other less serious alleged breaches of employment laws (which she denies), but the now dispatched charge of impeding the WRC officer was, Dublin District Court heard, the only one that carried a potential custodial sentence.

Moya Doherty, the Riverdance co-creator and RTÉ chairwoman, (see her interview elsewhere in today’s Business This Week) has concerns over another arm of the media: the (anti)social media.

Doherty is worried about the levels of abuse and harassment online, and would like to see stringent rules to deal with bullying: “I don’t think people should be just allowed to say what they want about other people on social media.”

The big web companies such as Twitter and Facebook, she argues, should no longer be allowed to “self-regulate”.

Abuse is abuse. But if the chairwoman of the national broadcaster feels able to back further restrictions for online posts, it shows how fraught the debate about what constitutes acceptable speech could potentially become.