Germany to double net borrowing for 2021 to fight Covid 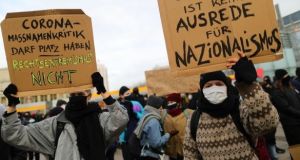 Opponents of Covid-19 restrictions pictured at a rally in Germany

Germany plans to almost double the borrowing it had planned for next year to finance emergency aid for businesses during the second wave of the Covid-19 pandemic, lawmakers said on Friday.

The parliamentary budget committee agreed to a debt figure of almost €180 billio- the second largest amount of net new borrowing in the history of post-war Germany.

“The high debt is necessary to bring our country safely through the pandemic,” politician Eckhardt Rehberg, of chancellor Angela Merkel’s Christian Democrats (CDU), told Reuters. “We must once again make use of the exemption rule from the debt brake.”

Enshrined in the constitution, the brake restricts the issuance of new debt by limiting the federal budget deficit to 0.35 per cent of economic output. Parliament suspended it this year in light of the pandemic.

Merkel’s government has already taken unprecedented steps to help companies and small businesses get through the crisis, freeing up billions of euros to prevent the economy from shrinking.

Germany will extend and tighten a partial coronavirus lockdown and keep bars, restaurants and entertainment venues shut until at least December 20th.

The government has said financial support for closed businesses would be extended.

The planned new debt of €179.82 billion for 2021 compares to €96 billion initially envisaged by finance minister Olaf Scholz in September.

“The new borrowing is the right thing to do. You cannot save your way through a crisis,” said Greens politician Sven-Christian Kindler.

The funding reserve for not yet quantifiable costs to tackle the pandemic was increased by €20 billion to €35 billion compared to the previous draft.