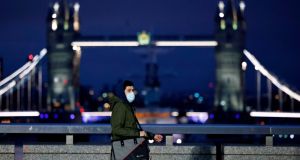 The chancellor’s problem is that the economic cycle is not aligned with the political one and the timing of any fiscal tightening is highly problematic. Photograph: AFP via Getty

Rishi Sunak’s spending review was full of grim warnings and eye-watering numbers about the scale of the impact of coronavirus on Britain’s economy and public finances. But it was a £4 billion (€4.5 billion) cut in the international aid budget that caused the biggest political waves, triggering the resignation of junior development minister Liz Sugg and a Conservative backbench revolt.

The £4 billion saving is the precise cost of Sunak’s new Levelling Up Fund, which will subsidise local projects such as libraries, bypasses and improved town centres. Many Conservatives who won seats from Labour last year in the midlands and the north of England will welcome that new funding and celebrate the cut to development aid.

The decision to reduce Britain’s commitment to international aid from 0.7 per cent to 0.5 per cent is in breach of last December’s Conservative manifesto. The state of Britain’s public finances suggests that Sunak may have to break a few more manifesto pledges, particularly on taxation and pensions.

The chancellor’s problem is that the economic cycle is not aligned with the political one and the timing of any fiscal tightening is highly problematic. After a decade of austerity following the financial crash, there is little political appetite for public spending cuts so most of the adjustment will have to come from tax rises.

With unemployment set to peak at 2.6 million next year and many sectors likely to emerge weaker from the coronavirus pandemic, tightening too soon carries economic risks. But delaying tax increases carries political risks as the government moves closer to a general election which must happen by 2024.

One argument for delay is the uncertain impact of Brexit, particularly if Britain and the European Union fail to reach a deal in the next few weeks. In its report accompanying the spending review, the Office for Budget Responsibility (OBR) effectively rubbished Sunak’s assertion last Sunday that the greatest impact of a no-deal outcome would be short-term.

It estimated that a no-deal outcome would reduce real GDP by a further 2 per cent in 2021 and would continue to diminish output for at least five years. A drop in sterling’s exchange rate and the impact of tariffs on goods from the EU would help to drive consumer prices upward by 1.5 per cent more than if a deal is agreed.

And the OBR crushes the hopes of some Conservatives that the impact of a no-deal Brexit would be obscured by the economic damage caused by coronavirus.

“A no-deal Brexit is likely to impinge on different sectors of the UK economy to those that have been hardest hit as a result of the pandemic,” it says.

“In absolute terms, the loss of output this year due to coronavirus is obviously much greater, but it is the degree of overlap (or lack of it) in the sectors affected that is relevant to judging the incremental effect of a no deal Brexit.”