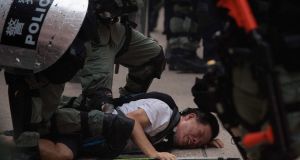 Richard Barrett’s Bartra Capital Property, which has been actively promoting the immigrant investor programme in mainland China and Hong Kong since early 2017, says it has seen a sharp spike in Hong Kong queries since violent pro-democracy protests swept the financial hub.

“I would have had 80 to 100 meetings with Hong Kong clients over the past few months,” said James Hartshorn, Bartra’s Asia director. This compares to the “handful” of such meetings a year ago. “There is certainly a sense that people are looking to increase their options.”

More than 1,000 international millionaires have successfully applied to Ireland’s golden visa programme, a Department of Justice spokesman told The Irish Times, with a further 350 applications currently going through the process.

The programme has resulted in over €700 million of investment into the economy to date, he said.

About 93 per cent of the applicants are Chinese nationals, and while the Department of Justice does not distinguish between mainland Chinese and Hong Kong applications, a spokesman said that “anecdotally we have noted an increase in inquiries from prospective Hong Kong-based investors”.

The programme provides a range of investment options which allows non-European Economic Area investors and their immediate family to enter the Republic on multi-entry visas for up to five years, with the possibility of ongoing renewal.

Investors must have a minimum net worth of €2 million and no criminal record. Since the introduction of the scheme in 2012, a range of due diligence measures have been introduced to verify the legitimacy of the applications, the department said.

Of the applications received to date, 69 per cent relate to enterprise investments, where a minimum of €1 million is invested in new or existing Irish businesses for a minimum of three years.

Endowments have accounted for 15 per cent, with an applicant donating €500,000 to a public project benefiting the arts, sports, health, culture or education. The endowment can be €400,000 per investor if it is pooled among at least five individuals.

About 12 per cent of the applicants have opted to put their money into investment funds that invest in Irish businesses and projects, which again requires an injection of at least €1 million for a minimum of three years, while the remaining 4 per cent choose mixed investments, bonds and real estate investment trusts.

Mr Hartshorn said Bartra directed the investments it received for the scheme into nursing homes and social housing as they were two priorities the Government has identified with the programme.

He said those opting for nursing homes invested for a five-year-term with a 4 per cent annual return, while the social housing option had a three-year term but offered no interest.

“It makes sense as the Government is using this programme to channel funds into areas of the economy that need them the most,” Mr Hartshorn said. “For the investor they get a residence visa, they have a safe investment and they get their money back after a fixed time.”

Other European countries that offer similar investment visas, including Portugal, Greece and Cyprus, have also reported an increase in interest from Hong Kong lately.

Analysts say that Europe should expect increased interest from both Hong Kong and mainland Chinese investors as the US EB-5 visa declines in popularity due to an upcoming rise in rates, high-risk investment options, extremely long waiting times of 15 years and more in some cases, and trade war tensions.

The Irish programme is currently undergoing an external review, and an initial report is expected in the coming weeks.