Deficit in first six months at €51bn, compared to surplus of €45bn for same period in 2019 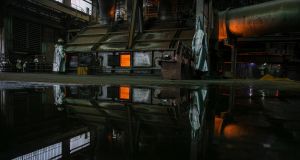 A blast furnace at the Thyssenkrupp AG metals plant in Duisburg, Germany.

Germany’s economy shrank by 9.7 per cent in the second quarter, down slightly from the original estimate of 10.1 per cent but still the worst slump in post-war history.

The slide is the greatest since Germany began compiling quarterly GDP figures in 1970, well ahead of a 4.7 per cent decline triggered by the 2009 global financial crisis

Covid-19 has punched a sizeable hole in Europe’s largest economy, according to the federal statistics office, with a total budgetary deficit of €51.6 billion in the first half of the year, compared to a surplus of €45 billion in the same period of 2019.

In its monthly report, the statistics agency said the half-year figures offered only “limited conclusions” for full-year forecasts. A separate survey by Munich’s Ifo economic agency gave an indication why: the fourth consecutive monthly increase in business confidence.

Its closely-watched index rose 92.6 points in August from 90.4 in July, beating economists’ predictions. German managers quizzed for the survey showed a small rise in optimism both for their current and future prospects than a month ago.

Munich’s Ifo has forecast the German economy will grow by almost 7 per cent in the third quarter after contracting by a record 9.7 per cent between April and June.

Germany’s economic decline has, to date, been less dramatic than in other major economies. France, Italy, Spain and Britain have all posted double-digit drops. Nevertheless the crisis has ended Germany’s decade-long run of balanced budgets.

Chancellor Angela Merkel called a meeting of her coalition partners on Tuesday to discuss measures to control the spread of the virus, and additional economic emergency measures.

Berlin has already agreed a €130 billion stimulus package for this and next year and is the the largest contributor to the EU’s multibillion loans and stimulus measures.

Germany’s labour minister Hubertus Heil is pushing for wage support measures to be extended by another year, expiring in March 2022.

The “Kurzarbeit” programme is designed to ease pressure on companies, allowing them send workers home or reduce their hours without having to lay them off.

Workers will still receive a significant chunk of their salaries, with the state stepping in to cover much of the shortfall as well as welfare and other non-wage costs.

Workers who are laid-off temporarily under the scheme receive 60 per cent of their pre-crisis salary from the state – or 67 per cent if the have children. From the fourth month the wage subsidy rises 10 points to 70/77 per cent and, from the seventh month, to 80/87 per cent.

In May, at the peak of the crisis to date, the federal labour agency was subsidising the salary costs of 6.7 million German workers.