Forget EU rules, Ireland should borrow as much as it can to deal with Covid-19

Chris Johns: Now is the time to ignore orthodoxy. Europe is having a bad crisis – it’s every country for itself 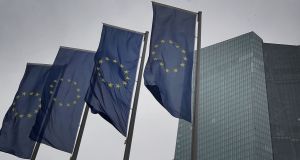 The State will have no problem financing a large deficit while the ECB is hoovering up supply in the bond market. Photograph: Daniel Roland/AFP via Getty

Attention is shifting from the things we are allowed to do to those we will choose to do. Our age will determine those choices. The older we are, the less we intend to go to shopping centres, travel or go out at all, while working from home is here to stay.

In a recent Ipsos/Mori poll of UK consumers, more than 60 per cent of people said they would be uncomfortable, post-lockdown, going to bars and restaurants, using public transport or attending large sporting events. Nearly half said they didn’t fancy the idea of sending their children to school. If permanent, these kind of beliefs will have profound effects.

But how likely are they?

The economist Chris Dillow reminds us of “projection bias”, the trap we fall into when we assume our current mood and behaviours will persist into the future. Psychologists define this bias differently, suggesting the key error is assuming our personal beliefs are shared by everyone else. It seems to me that both kinds of bias could be at work right now and we need to tread carefully while thinking about the post-coronavirus future. That future will be different to the past – it always is – but we will be surprised by some of those differences.

One change is already with us: economies are smaller. Futurologists are focused mostly on the changes to the composition of the economy. And those changes might have only just begun. But the size of the economy really does matter.

After the financial crisis, economies took years to get back to where they started. Growth didn’t bounce back in the way many of us hoped, leading to all sorts of problems. Income and wealth inequality, pressure on public finances and social problems are all more easily tackled when the economy is growing. If the economy is to be cut up differently – and it isn’t growing – then it is a matter of simple arithmetic to point out that if one person’s slice is to be bigger, somebody else’s will have to be smaller.

The politics of that are always poisonous. Post Covid-19, the choices faced by politicians will be hard enough – without economic growth they become next to impossible.

One trap the authorities must not fall into is rushing to restore “order” to public finances.

Governments can run large deficits for as long as they can borrow at next to nothing. Trouble will begin when bond yields start to rise. That will happen one day but hopefully not for a very long time.

The official projection for the fiscal deficit is “at least 7.5 per cent of GDP in 2020”. They will have no problem financing that deficit. That’s because a gorilla-sized buyer sits in the bond market, hoovering up supply. That’s the European Central Bank.

Orthodox thinking mandates that while large deficits this year and next are inevitable, they should still be kept as small as possible. It’s time to junk that orthodoxy. For as long as that gorilla is buying up our debt we should push borrowing as hard as we can. The time will come when we can’t do this but it won’t be any day soon. And if anybody mutters about European rules, just ignore them as every other country in the EU has done. Europe is having a bad crisis: it’s every country for itself.

Extra borrowing should be used to build up a contingency fund for dealing, as best we can, with the post-coronavirus world. It could be used to support growth, should it fall short. Simultaneously, it could target known priorities – housing and health – and ones yet to reveal themselves, the ones caused by those behavioural changes that may alter the shape of the economy. Extra borrowing is the only practical way we have to “print money”. It’s a smoke and mirrors approach but it’s the only one open to us.

Downside and upside risks exist side by side. There won’t be enough money to satisfy everyone. This really will be about priorities. In terms of crisis spotting, the environment must be top of our risk lists. If technology companies turn out to be the big winners from this crisis, we might be surprised by how lucky that turns out for the Irish economy.

Bosses of property companies pour cold water on the widely held idea that we will need far less office space going forward. But it’s conventional wisdom among investors that commercial property valuations are at risk if working from home really does catch on. The internet has decimated the high street and it may be about to do the same to our offices. City centres can be both reimagined and repurposed: that’s the environmental possibility that governments should both encourage and manage.

Those property owners forecasting what they most wish for – working from home will turn out to be a short lived fad – will be comforted by the views of Nick Bloom, an economics professor at Stanford University. Bloom thinks home working will be a “productivity disaster” and that many of us are dying to get back to the office.

I think he’s wrong but only time will tell. The future, as we should know by now, really is unknowable. But we need to be better prepared for it.

1 Belgium helps Ireland to a Brexit boon
2 ‘My rent here is so low it’s a joke’
3 New Powerscourt Springs hotel to open in defiance of virus gloom
4 This charming man: how Paschal Donohoe won the Eurogroup presidency
5 Can Grafton Street stop the flood of closures?
6 ‘Sad day’ for House of Ireland as tourism retailer goes out of business
7 Goodbody’s planned €155m sale to Bank of China falls through
8 Goodbody loses a second suitor as Bank of China deal falls through
9 Pharmaceutical industry signals it won’t extend drugs agreement
10 Donohoe’s new role puts State at centre of debate over EU’s future
Real news has value SUBSCRIBE