Meet Sam, the resourceful young fox that has made Dublin city centre its home 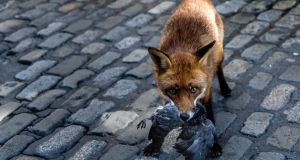 Dublin for Sam: the capital’s fox having its breakfast on Friday. Photograph: Paul Lanigan

On Friday morning, photographer Paul Lanigan ventured into Dublin city centre with the intention of taking photographs of empty streets during the Covid-19 pandemic.

The streets were empty alright, but of humans, not a fox which ambled down Fleet Street in Temple Bar with its breakfast in its mouth. The time was 9am when the street would normally be full of delivery trucks and tourists on an early morning stroll.

“I never thought I would see a fox in daylight, especially at 9am. It didn’t seem possible,” Mr Lanigan said.

He approached the fox carefully. Fortunately the animal was preoccupied with the pigeon in its mouth. Mr Lanigan got his photograph.

It is the same fox that was filmed on Grafton Street last week strolling in the early afternoon in a thoroughfare that would normally be thronged with shoppers.

The fox has a name. It’s Sam, according to Trinity College Dublin zoologist Collie Ennis, a suitably androgenous name as nobody who has observed the fox can tell at this stage if it is a dog (male) or a vixen (female).

It is about 11 months old, he reckons, and has a mangey tail. Mr Ennis said Sam’s parents inhabit a territory around Merrion Square.

Now that Sam has reached a certain age, it has been kicked out of the den, and unlike its human equivalents, cannot plead that the rents in Dublin city centre are too exorbitant.

“All the time now at Trinity, you see him sitting at Lincoln Place gate at the dental hospital mournfully looking towards where Mammy and Daddy hang around. That’s why he’s out and about in the city centre during the day looking a bit panicked,” explains Mr Ennis.

“We were concerned that he was not eating, but we can see from the photograph that there is no need to be concerned. They are incredibly adaptable animals. They can switch from McDonald’s leftovers to killing rats and pigeons within days which is exactly what happened.”

UCD zoologist and PhD student Holly English says Sam looks like a healthy young adult fox who is fully grown though it is not possible to discern the sex of the animal from the photograph.

She says the pictures demonstrates how foxes are the “ultimate opportunists” and are excellent scavengers.

“I think based on commentary I’ve seen online, some people are worried that foxes in the city centre have less to eat these days because the restaurants and everything are closed,” she said.

“But this photo is a fine example that foxes are wild animals and well able to find food on their own. They’re excellent predators. They’re just as good at taking any opportunistic scraps left behind by people too.”

Ms English says this is an “incredibly busy time” for foxes as cubs are born following the mating season which lasts from January to March. Cubs, which were born the previous year will often help out their parents in scavenging for food for the new arrivals.

She believes that the increased sightings of foxes in city centre locations during daylight hours is related to the lockdown.

“They are more nocturnal. These day-time sightings are connected to the number of people out and about.”

She had hoped to get some special collars put on Dublin’s foxes so we can get a better idea of what size their territories are in the city and learn more about their behaviour, but that activity has been suspended because of the lockdown.

► VIDEO: Window shopping at Brown Thomas? A fox takes advantage of the Covid-19 restrictions and takes a wander down a near-deserted Grafton Street, Dublin pic.twitter.com/4rfAxg7wN4