Sally Hayden: The stories that will never be told 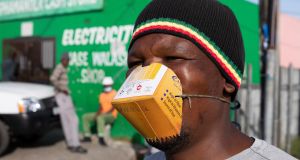 A South African man wears a mask made from a breakfast cereal box in Masiphumelele informal settlement, Cape Town, South Africa, 01 May 2020. South Africa has moved its total lockdown to a slightly less restricted level 4 lockdown part of a government risk adjusted strategy to try stem the spread of the coronavirus SARS-CoV-2 which causes the Covid-19 disease. In level 4 lockdown the wearing of masks outside is compulsory. EPA/NIC BOTHMA

In northern Iraq, four years ago, I drove through streets desolate of people but crowded with destruction. This was the time of the Mosul offensive, when the so-called Islamic State was being pushed from their territory. As they retreated, militants looted everything they could find, even pulling air conditioners and electrical wires from the walls of houses. Behind them, they left bombs.

I interviewed a young boy, scarred for life after an improvised explosive device went off while he was playing with a friend. His friend died instantly. Afterwards, I went back to my hotel and powered up my laptop to begin typing what I had seen. But the screen was static; the laptop broken.

As a journalist who has reported on crises and conflict around the world - from Kenya to northeast Nigeria; Syria to Sudan - people often ask me if I get upset by the things I see. It took me a while to realise that the stories that hurt the most are the ones that never get published. That has happened for all sorts of reasons - a broken computer, a missed email, a source that backs out of going public. In those situations, I feel like I haven’t done my job properly.

This Sunday marks World Press Freedom Day. We will talk about issues like censorship, the stringency of libel laws and the tragic killings of journalists across the globe (at least 554 have been murdered over the past decade ).

The coronavirus pandemic means there is another crisis for journalism and again, I am experiencing what happened in Iraq. This time, though, it’s not because of a broken laptop but because of rapidly decreasing budgets.

Journalism has long been in crisis because many news consumers are unwilling to pay for news, but now advertising revenues are plummeting. If stories can’t be reported because the news media has no money then issues like censorship are moot.

A survey of 1,300 journalists in 77 countries, carried out by the International Federation of Journalists this month, found two thirds had suffered pay cuts, job losses, cancelled projects or worse working conditions. Nearly ever freelancer had lost assignments or revenue.

Last week, editors from four international outlets told me their budget is almost gone. A crowdfunded Google document lists 80 publications which have put freelance commissions on hold. Crisis funds for journalists, now springing up, are receiving hundreds of applications.

Less money for news media means more stories that will never be told.

Ruchi Kumar, a freelance journalist based in Afghanistan, has had three reports dropped since the coronavirus pandemic began. “One was about an Afghan deportee who was forced to join the insurgency. I had finished reporting, writing and even one round of edits before the publication decided to not carry it,” she said. “The story is kind of time sensitive because it revolves around the Afghan peace talks, but more importantly, for me it was a very hard piece to work on, sourcing and then verifying information from an alleged insurgent.”

”Imagine all the crazy or nefarious things that are happening right now because (people are) not paying attention to them,” said Jacob Kushner, a freelance journalist in Kenya, who has also lost work.

For staff journalists, budget cuts can mean less time to work on a story, fewer investigations, and (even when it’s possible again) not having the chance to travel and see something in person. (The Irish Times, like many other newspapers, has cut the pay of editors and senior management). In most of the world, journalists have been considered essential workers throughout the pandemic. That doesn’t mean they are always free to move around (“Essentials like media - does that mean media every day?” - a representative for the Ugandan president asked me this week, after my government-issued travel permit was confiscated for the second time). Yet they attempt to bear witness, hold truth to power, and separate fact from fiction.

Over the last three years, I have reported on a series of outbreaks. In Madagascar in 2017, I visited a plague hospital. In 2018, I crossed Liberia learning about the devastation wrought by tuberculosis. And last year, in the Democratic Republic of the Congo, I met Ebola patients as they were traced, isolated and eventually released.

These crises all had one thing in common. When information wasn’t available, rumours gained ground. That led to guidelines for social distancing and hygiene not being followed, lies by politicians going unchecked, mistrust and protests.

Two weeks ago, a debate around paywalls erupted on the internet, after Guardian columnist Owen Jones posted screenshots of a Sunday Times investigation into the UK’s mishandling of COVID-19. The resulting online debate focused on whether some articles are so vital for democracy that everyone must see them and they should be provided free of charge.

At that point, the Sunday Times investigation was already finished. What about the next piece of writing or reporting that never gets off the ground? Society will suffer for the loss of it.

Sally Hayden reports for the Irish Times from Africa