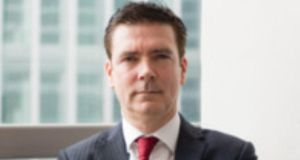 John Fell, the longest-serving Irish staff member at the ECB, is understood to be among individuals who put their names forward for the Central Bank governorship.

The most senior Irish member of staff at the European Central Bank (ECB) and the deputy secretary general of the Department of Health have emerged as candidates seeking to succeed Philip Lane as governor of the Central Bank of Ireland.

John Fell, who moved to Frankfurt 25 years ago to join the European Monetary Institute, a forerunner of the European Central Bank, before joining the central bank on its establishment in 1998, is understood to be among individuals who put their names forward for the Central Bank governorship before a deadline last Friday.

The longest-serving Irish staff member at the ECB, and one-time member of the EU-IMF troika team that oversaw Ireland’s international bailout programme, is currently deputy director for macroprudential policy and financial stability at the organisation.

Colm O’Reardon, deputy secretary general of the Department of Health and former economic adviser to ex-tánaiste Eamon Gilmore, is also among candidates as a panel that will help choose the next Central Bank governor prepares to hold interviews in the coming weeks, according to sources.

Mr O’Reardon was appointed to the department in 2015, when Leo Varadkar was minister for health.

Central Bank deputy governor Sharon Donnery, who has been hotly tipped in political and regulatory circles to become the first woman – and first internal candidate – to head up the institution, has also submitted an expression of interest for the job.

In addition, Andrew McDowell, vice-president of the European Investment Bank in Luxembourg and a former senior adviser to Enda Kenny when he was taoiseach, is among the runners and rider and is seen as a strong contender, according to sources.

Robert Watt, the secretary-general of the Department of Public Expenditure and Reform, who went up against Mr Lane in 2015 for the top Central Bank job, was also said to be considering submitting his name before the deadline.

All of the named candidates either declined to comment personally or through representatives.

The contest to lead the Central Bank, which has about 1,900 staff, has come about after Mr Lane was confirmed by EU leaders last month as the next member of the ECB’s executive board from the start of June.

ECB president Mario Draghi is widely expected to name the Irishman as his next chief economist, succeeding Peter Praet in the role.

Minister for Finance Paschal Donohoe announced last month that the Government was going to conduct an “extensive national and international search” process to find Mr Lane’s successor, with the help of executive search firm Merc Partners. It is expected that the selection of the next governor will be made in early May.

Some names that had previously been suggested as potential candidates – including National University of Ireland, Galway economics professors Alan Ahearne and John McHale, and Department of Finance secretary-general Derek Moran – have not allowed their names to go forward.

Mr Moran was appointed last week to the four-member panel that has been charged with coming up with a shortlist of candidates for the Government. The other members of the panel are: Josephine Feehily, chairwoman of the Policing Authority and former Revenue chair; Patricia Byron, a member of the Central Bank Commission; and Nicholas Macpherson, a former permanent secretary to the UK treasury.