But experts say it is too early to call a recovery 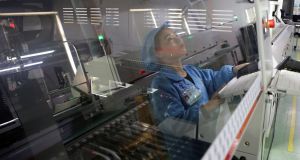 An employee working on the production line of an electronics factory in Jiaxing, Zhejiang province. Photograph: Reuters

China’s economy grew at a steady 6.4 per cent pace in the first quarter, defying expectations for a further slowdown, as industrial production jumped sharply and consumer demand showed signs of improvement.

The upbeat readings, which included faster investment growth, come as Beijing and Washington appear to be nearing a trade deal. Investors have ranked China’s slowdown and the trade war as the biggest risks facing the faltering global economy.

But analysts warn it is too early to call a sustainable turnaround in China, and further policy support is needed to maintain momentum in the world’s second-largest economy. Many had expected a recovery only in the second half of 2019.

Beijing has ramped up fiscal stimulus this year to shore up growth, announcing billions of dollars in additional tax cuts and infrastructure spending, while Chinese banks lent a record 5.8 trillion yuan (€766 billion) in the first quarter, more than the gross domestic product (GDP) of Switzerland.

“We need more evidence to call a full-fledged recovery. Our view for the economy is still cautious,” said Jianwei Xu, senior economist, Greater China at Natixis in Hong Kong.

“We think it (the stronger-than-expected data) is somewhat linked to the stimulus, but we can’t attribute it all to it.”

Analysts polled by Reuters had expected GDP growth to slow slightly to 6.3 percent in January-March from a year earlier.

Government support is gradually having an effect, though the economy still faces pressure, Mao Shengyong, spokesman at the National Bureau of Statistics, cautioned on Wednesday.

Quarterly growth was supported by a sharp jump in industrial production, which surged 8.5 per cent in March on-year, the fastest in over 4-1/2 years. That handily beat analysts’ estimates of 5.9 per cent and 5.3 per cent seen in the first two months of the year.

Output of construction materials such as steel and cement, as well as machinery, showed strong gains.

Exports rebounded more than expected in March, but analysts say the gains could have been due to seasonal factors rather than a rebound in tepid global demand. Long holidays in February likely pushed some production into the following month.

The jump in output was also somewhat at odds with trade data last week, which showed imports shrank for the fourth straight month, suggesting domestic demand is still sluggish.

“We don’t think the strength in industrial output is sustainable, said Nie Wen, an economist at Hwabao Trust.

“At home, the huge amount of social financing might ease as the central bank is wary of reigniting property market bubbles, while abroad the global economic recovery is expected to slow down,” Nie said, pencilling in more moderate output growth of 6.0-6.5 per cent for the rest of the year.

Total social financing (TSF), a broad measure of credit and liquidity in the economy, quadrupled in March to 2.86 trillion yuan.

The OECD on Tuesday sounded a warning about the dangers of prolonged stimulus, saying China’s support measures will shore up growth this year and next but may undermine its drive to control debt and worsen structural distortions over the medium term.

Analysts polled by Reuters expect China’s economic growth to slow to a near 30-year low of 6.2 per cent this year, as sluggish demand at home and abroad and the trade war continues to weigh on activity despite support measures.

Wednesday’s data also helped ease some fears of weakening consumer confidence in China. Retail sales rose 8.7 per cent in March, beating estimates of 8.4 per cent and the previous 8.2 per cent.

But auto sales extended their decline in March, falling 4.4 per cent on-year. Falls in China’s auto output and sales are expected to ease and return to growth, the statistics bureau’s Mao said.

Fixed-asset investment expanded 6.3 per cent in January-to-March from a year earlier, in line with estimates but picking up from the previous period.

Local governments will be allowed to issue 2.15 trillion yuan ($321 billion) of special purpose bonds in 2019 to fund infrastructure projects, a jump of 59 per cent from last year.

On a quarterly basis, GDP in the first quarter grew 1.4 per cent, as expected, but dipped from 1.5 per cent in October-December.

Analysts do not expect a sharp rebound in China’s economy like recoveries in the past, which produced a strong reflationary pulse worldwide. Most say its stimulus has been relatively more restrained this time around, given concerns about high levels of debt left over from past credit sprees.

Earlier support measures will take time to fully kick in, and corporate balance sheets are expected to remain under stress if profits are slow to recover from their worst slump in more than seven years.

Some analysts such as Nomura warn there is a risk of a “double dip”, where growth appears to be improving only to falter again a few months later. In particular, it noted a further heavy drop in land sales.

The central bank has already slashed banks’ reserve requirement ratio (RRR) five times over the past year and is widely expected to ease policy further in coming quarters to spur lending and reduce borrowing costs.

However, some analysts said authorities could be more cautious about further stimulus if data remains solid.

China has rolled out many policies to support growth - the key is to implement them, Mr Mao said.