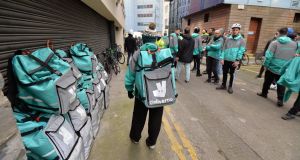 Deliveroo said its workers don’t fall under the scope of this new directive as genuinely self-employed workers are not covered. Photograph: Alan Betson

Gig economy workers will benefit from greater protections after Brussels approved a new set of rules.

Members of the European Parliament (MEPs) approved minimum rights for workers with on-demand jobs and singled out those working for Uber and Deliveroo.

However, Deliveroo said its workers don’t fall under the scope of this directive as genuinely self-employed workers are not covered. “Deliveroo wants to give riders more security, but in a way that is compatible with the flexible working that we know riders value. Riders are self-employed and, as the European Parliament says, riders are therefore out of scope of this directive,” a spokeswoman said.

Already agreed with EU ministers, the law grants a set of minimum rights for those in casual or short-term employment if they work a minimum of three hours per week and 12 hours per four weeks on average.

Spanish Independent MEP Enrique Calvet Chambon, the legislation’s rapporteur, said the directive was a big step towards the implementation of the “European pillar of social rights”.

“All workers who have been in limbo will now be granted minimum rights thanks to this directive, and the European Court of Justice rulings, from now on no employer will be able to abuse the flexibility in the labour market,” he said.

Specifically, the legislation means that gig-economy workers will benefit from a “minimum level of predictability” such as pre-determined hours. They should also be able to refuse, without consequence, an assignment outside predetermined hours or be compensated if the assignment wasn’t cancelled in time.

Additionally, workers will now have to be informed within the first seven days of their employment of the essential aspects of their employment contract such as a description of duties, a starting date, the duration, remuneration, standard working day or reference hours for those with unpredictable work schedules.

The new law will also provide that probationary period can be no longer than six months, or proportionate to the expected duration of the contract in the case of fixed-term employment.

Additionally, a renewed contract for the same function will not result in a new probationary period.

Finally, the employer will provide mandatory training, which will count as working time, free of charge. And that training should be completed within working hours, where possible, according to the legislation.

The new legislation results from increasing flexibility in Europe’s labour market. According to Eurostat’s EU labour force survey, in 2016, 25 per cent of employment relationships were “non-standard”.

During the consultation phase for the law, employers were opposed to the proposal with a plethora of business bodies in Europe suggesting it could have a negative impact on flexible employment conditions. The European Trade Union Confederation, meanwhile, welcomed the proposal but had concerns that it wasn’t robust enough to give workers with precarious arrangements the protection they need.

The Department of Employment Affairs and Social Protection said the Government supports the aims of the directive despite having some concerns about the broad definition of worker.

“Ireland supported the endorsement of the provisional agreement in the interests of compromise and EU unity,” a spokeswoman said.

While the directive already includes measures provided for in the Employment (Miscellaneous Provisions) Act 2018, she added that the department “aims to transpose the directive in advance of the transposition deadline”, which will be three years from when the directive is formally adopted in June.