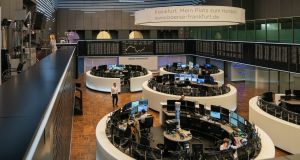 European stocks extended losses on Tuesday as worries about the economic fallout of tighter coronavirus restrictions on the continent overshadowed some better-than-expected earnings reports. The pan-European Stoxx 600 index fell 1 per cent to a one-month low, on rising infections in the United States and Europe and fading hopes of a US stimulus package before the presidential election. Focus will now be on Thursday’s meeting of the European Central Bank for clues on monetary stimulus for the bloc. “The ECB is widely expected to stand pat until the next meeting. Macro forecasts won’t be updated until the December 10th meeting, but the bank will have to acknowledge the deteriorating outlook now,” said Win Thin, global head of strategy at Brown Brothers Harriman.

The Iseq was down nearly 2 per cent at 6,339. Permanent TSB bucked the trend for financials, which was sharply down, by rising 5 per cent to 50 cent. This was after it announced it was selling a pool of interest-only buy-to-let mortgages with a gross value of €1.4 billion to US banking giant Citigroup. It also downplayed the likelihood of a merger between it and Ulster Bank. Rivals AIB and Bank of Ireland were down by 3 per cent and 1 per cent amid the worsening outlook across the euro zone generally. Ryanair was also down again, this time by a sizeable 4 per cent - shares fell by nearly 3 per cent on Monday - as investors fretted about the lasting impact of Covid-19 restrictions on Europe’s beleaguered aviation industry. Swiss-Irish food group Aryzta was also on the slide again, falling by a further 4 per cent to 47 cent as hopes of a takeover fade.

Newry-headquartered technology company First Derivatives was the springer in the market, jumping 16 per cent to €36.80, after it forecast revenue to accelerate on foot of the pandemic.

London stocks closed sharply lower for the second straight session on Tuesday as worries about fresh Covid-19 curbs across parts of England offset the impact of progress in Brexit talks and of positive results from Europe’s biggest bank HSBC. The blue-chip FTSE 100 index slipped 1.1 per cent in choppy trading, dragged lower by mining, energy and insurance stocks. Uncertainty over a Brexit trade deal and concerns about the financial fallout from coronavirus-related restrictions have pressured British markets this month, with data also pointing towards a faltering economic recovery.

The Bank of England is expected to ramp up the size of its asset purchase programme by a further £100 billion on November 5th to support a struggling economy, a Reuters poll of economists found. Meanwhile, the European Commission said the European Union and Britain are engaging intensively to clinch a Brexit deal on their future relationship.

In a bright spot, Asia-focussed HSBC Holdings jumped 3.4 per cent after it signalled a pandemic-induced overhaul of its business model. Bloomsbury Publishing gained 18.1 per cent after the Harry Potter publisher posted higher first-half profit and resumed dividend payments. But shares in oil major BP fell 2.1 per cent. The company swung back to a small profit in the third quarter, but also warned of pandemic-related uncertainties.

Spain’s Ibex index fell 2.1 per cent on worries about the economic impact of coronavirus-related curbs. Third-quarter earnings from Europe remain largely positive. Out of the 27 per cent of the Stoxx 600 companies that have reported so far, 73 per cent have beat profit expectations, according to Refinitiv data. French consulting and IT services provider Capgemini jumped 2.1 per cent after confirming its full-year targets.

Tobacco group Swedish Match climbed 3.5 per cent as it reported a bigger-than-expected rise in quarterly profit on the back of higher sales of smokeless products. Miners fell 1.4 per cent, dragging markets lower, after Liberum analysts downgraded stocks of Rio Tinto, Antofagasta and KAZ Minerals.

The S&P 500 and Dow fell on Tuesday, dragged down by a string of earnings disappointments and doubts about a coronavirus stimulus package before Election Day, although Nasdaq rose ahead of results from mega-cap technology companies. Caterpillar fell 3.1 per cent and 3M slipped 1.8 per cent after both the industrial companies reported a fall in quarterly earnings. Investor sentiment sagged after the White House said a potential deal on Covid-19 relief could come in “weeks,” casting doubt on whether an accord could be struck with Congress before the November 3rd election.

Sectors sensitive to economic growth took a hit. The S&P 500 banks index and the S&P energy sector shed about 1 per cent each. The three major US stock indexes fell to near four-week lows on Monday as investors fretted about record number of new coronavirus infections in the United States and some European countries and an elusive fiscal stimulus. Meanwhile, Wall Street’s fear gauge hovered at its highest level in nearly two months on jitters over the outcome of the election. - Additional reporting by Reuters