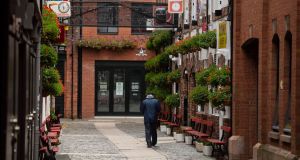 A street in Belfast: In its current form, the Northern Ireland economy would be exceptionally challenging to merge into any united Ireland. Photograph: Mark Marlow

For much of the first 50 years of independence, our Dáil parties and wider society cared more about the idea of a united Ireland than about the reality of life in Northern Ireland. The UK government also cared nothing about what happened in the North.

Following the draft Boundary Commission report proposing only minor changes in the Border, the Cosgrave government in late 1925 undertook intensive negotiations with the UK government.

Initially they sought protection for northern Catholics from the discrimination they were suffering. However, in the end, the Irish side settled for a massive debt write-off in return for leaving the Border unchanged.

Thereafter, Irish governments did not formally raise the plight of Catholics in Northern Ireland with the UK government until the 1960s. Instead, successive governments paid lip service to Irish unity.

With the outbreak of the Troubles in 1969, the Irish government began a long-term engagement with the UK government, seeking the ending of discrimination in Northern Ireland and the establishment there of a fair and workable political system. Since then these issues have been a central focus of all Irish governments.

The Government’s “Shared Island” approach, set out by the Taoiseach on Thursday, aims to break down barriers between North and South and facilitate the reduction in barriers within Northern Ireland itself.

De facto, successive Irish governments have recognised that Irish unity can only follow the establishment of a workable political and economic system in Northern Ireland, where the sectarian divide no longer determines all outcomes and where co-operation between North and South develops organically.

To make the Northern Ireland economy work, major reforms are needed. If implemented they would make Northern Ireland more secure within the UK while, at the same time, making Irish unity a more feasible economic option.

Without such reforms, Northern Ireland will be at serious risk from the growth of English nationalism, which could turn down the financial taps in the future.

At the same time, in its current form, the Northern Ireland economy would be exceptionally challenging to merge into any united Ireland.

Among the economic reforms needed are major changes in the education system, in agricultural support, in climate policy and in public investment in infrastructure.

Communities within the North remain hugely polarised along sectarian lines

The current two-tier education system in Northern Ireland streams pupils into two kinds of second-level schools. Most grammar school pupils go to university while relatively few from the secondary tier do so.

As a result, Northern Ireland has the highest share of early-schoolleavers in the UK, and this has a major negative social and economic impact. Reform to provide for a mixed-ability education system will be painful. Many established interests on both side of the religious divide will resist.

Northern Ireland also has the lowest share of graduates in the UK, partly due to emigration of young people from a unionist background who study, then settle, in Britain. Reversing this flow will require more than money. Northern Ireland must be seen by its young people as an attractive place to build a career.

Farming is still an important sector in the North, not so in England where, post-Brexit, major changes are being made to farm support with the focus on payment for desirable environmental goals.

There are no immediate plans to change the North’s farm support system, where funding for the next four years is agreed. However, if Northern Ireland agriculture does not evolve in line with environmental priorities, continued funding may be in doubt.

While the UK has ambitious plans to decarbonise by 2050, and legislation to make that happen is enacted in England and Scotland, Northern Ireland has yet to define a path to decarbonisation consistent with the UK’s (and the EU’s) goals for 2050.

Like all major reforms, there will be winners and losers. Major obstacles to implementing change are, for the DUP, any move away from “English” models; and, for Sinn Féin, adopting and implementing policies in the North that they oppose in the Republic.

On top of that, communities within the North remain hugely polarised along sectarian lines. Without deep reforms and social change, any Irish unity would see the Republic absorbing a hugely indigestible Northern Ireland. But economic reforms within the North would greatly benefit both communities and build a basis for better inter-community relations.

A referendum on unification prior to any serious reform within Northern Ireland would be putting the cart before the horse.