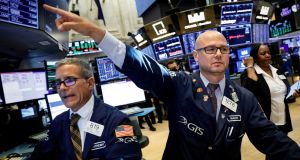 US stocks turned lower on Thursday as the first contraction in the manufacturing sector in nearly a decade and uncertainty about future interest rate cuts overshadowed an initial boost from upbeat retail earnings. Photograph: Reuters/Brendan McDermid/File Photo

European shares fell on Thursday as mixed readings of business growth across major economies and uncertainty over the US interest rate outlook made investors nervous, while a jump in the pound dented London stocks.

The latest data showed business growth in the euro zone recovering marginally in August but factory activity shrinking in both Japan and the United States, raising questions about the health of the global economy. Adding to the dour mood, Germany’s central bank said it did not see the need for fiscal stimulus at this time, even though it expected the economy to shrink again this quarter. The pan-European Stoxx 600 index ended 0.4 per cent lower, with euro zone equities down 0.6 per cent. Further eating into sentiment were comments from Philadelphia Federal Reserve Bank president Patrick Harker who said on Thursday that he did not see the case for additional stimulus. Markets are however, waiting for more clarity on the Fed’s stand from chairman Jerome Powell who is due to talk on Friday and offer further clues on the rate-cut outlook.

Dublin’s Iseq traded marginally down at 5,768 similar to other European indices. Building materials group CRH fell 1.75 per cent to €28.72 despite seeing earnings hit a record €1.54 billion in the first half of 2019. A trader said the results were in line with expectations and the slide was largely technical. After being weak all day, Ryanair closed up 0.5 per cent at €8.53 in a busy day’s trading, which saw more than six million shares change hands. The airline’s unions in Ireland, Britain, Spain and Portugal have been planning strikes in the coming weeks over various grievances. A springer in the market was Bank of Ireland, which rose 6 per cent to €3.51, snapping a series of weak sessions. A broker said sellers had simply exhausted themselves. The financial sector across Europe was slightly stronger on more positive news regarding Brexit. AIB rose 1.4 per cent €2.31. Property group Ires Reit fell 0.4 per cent to €1.66 despite securing planning permission for almost 430 apartments at Rockbrook in Sandyford, Dublin 18.

London’s FTSE 100 fell on Thursday as the latest signals from the US Federal Reserve dampened hopes of hefty interest rate cuts, while exporter stocks slipped as the pound rose after German chancellor Angela Merkel’s comments on the Brexit deal. The FTSE 100 shed 1.1 per cent, while the FTSE 250 was roughly flat. Companies that book a major chunk of their earnings in dollars, including Diageo and Unilever dropped after Ms Merkel said a solution to the Border problem could be found before Britain leaves the European Union on October 31st. BAT gave up 1.5 per cent, hit by the gains in sterling as well as a probe by a US House panel into e-cigarette manufacturers over the health impact of their products. Imperial Brands lost 2.7 per cent, as the stock also traded ex-dividend. UAE-based healthcare provider NMC Health was the standout performer, surging more than 18.5 per cent for its best day ever, after sources said two groups, including one backed by China’s Fosun, were competing to buy a 40 per cent stake in the company worth up to $1.9 billion. The company also posted half-year results and announced plans to buy back up to $200 million worth of shares.

Banks were among the few sectors in the black as lenders in the region cheered the European Central Bank’s latest move to offer them more time to set aside cash to cover for loans that have gone or may go unpaid. Madrid’s lender-heavy index got an additional boost from a more than 2 per cent rise in BBVA, Caixabank and Banco Sabadell after HSBC took a bullish stand on the domestic banking sector in Spain.

US stocks turned lower on Thursday as the first contraction in the manufacturing sector in nearly a decade and uncertainty about future interest rate cuts overshadowed an initial boost from upbeat retail earnings. Nine of the 11 major S&P sectors were lower with a 0.59 per cent decline in technology weighing the most on the benchmark index. Interest-rate sensitive bank stocks gained as central bankers toned down expectations of aggressive rate cuts. Leading gains on the S&P 500 was Nordstrom, up 15.4 per cent, as it joined Target and Lowe’s this week in delivering strong quarterly profits and bolstering confidence in consumer demand. L Brands slid 7.8 per cent after the Victoria’s Secret owner reported quarterly sales short of estimates. – Additional reporting by Reuters

1 My aunt never told us that Gran passed away with no will
2 Ryanair to slash 1,000 flights from August and September schedules
3 If it’s safe to do so, could this be the time to spend for Ireland?
4 The $6bn judgment pitting Nigeria against Irish businessmen
5 Green Party TD queries ‘usefulness’ of another appeal in €13bn Apple tax case
6 Netflix stock drops after downgrade by UBS analysts
7 Costs and borrowing rules locking a generation out of home ownership, builder warns
8 Will Revenue come calling with tax bill if inheritance tax threshold falls?
9 Davy raises mortgage lending forecast as home listings rise
10 Majority of employees don’t want to return to pre-Covid working patterns
Real news has value SUBSCRIBE