Planet Business: No, Greenland is not for sale 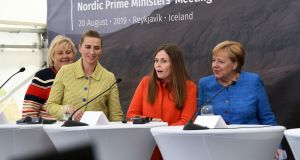 Image of the week: Nordic example

Climate change was top of the agenda this week in Iceland, where various Nordic leaders plus Germany chancellor Angela Merkel met to sign a joint declaration on sustainability with chief executives of companies like Nokia, Vestas, Telenor and SAS. Pictured in a lighter moment around the lecterns are Norway’s prime minister Erna Solberg, Denmark’s prime minister Mette Frederiksen, Iceland’s prime minister Katrin Jakobsdottir and Merkel, while in the interest of gender balance, it should be pointed out that the (male) prime ministers of Sweden and Finland were also there. The declaration said the Nordic region would “lead by example” and “become the most sustainable in the world”, as Jakobsdottir put it. “Both nature itself and the youth of our countries are sending us a clear message that radical measures are due.” Meanwhile, US president Donald Trump was busy being incensed from afar by Frederiksen’s insistence that Danish territory Greenland was “not for sale”.

Bosses of Iseq 20 companies are paid this many times more than the average employee, after securing a collective pay rise of 13 per cent on the previous financial year, according to Irish Times research.

The average salary for chief executives at the UK’s largest listed companies is this times more than the average UK full-time worker, says its professional HR body CIPD.

The remuneration of the bosses of the US’s largest 350 companies is this multiple of the pay of their average worker, according to the Washington’s Economics Policy Institute.

Getting to know: Spider-Man

While there’s probably a high-flying businessman somewhere who goes by the moniker Spider-Man, the Spider-Man in question here is the original Peter Parker, the guy who hangs out with Mary Jane and loves a red-and-blue suit. As any Marvel-loving children in your life will be able to explain, Spider-Man was originally a Marvel comic book character, but in 1999 Sony bought the film rights for the superhero, releasing five films before a 2015 deal with Marvel and its parent company Disney opened the door for Spider-Man to join the never knowingly underhyped Marvel Cinematic Universe. This meant the character, now played by Tom Holland, could show up in various Marvel films (including all-time box office topper Avengers: Endgame) and Spider-Man: Far From Home (currently in a cimema near you). Alas, Sony and Disney have been unable to agree profit-sharing terms on future releases, so Sony will be going it alone on its superhero, and Spider-Man is unlikely to be hanging out with his Avengers pals anymore. That’s showbusiness.

Notwithstanding the general sense that no one has a clue what they’re doing, there’s no shortage of codenames in connection to Brexit, and if some of them are a bit military-sounding, well, that’s because they involve the military.

2. Project Kingfisher. Created by former chancellor Philip Hammond, Kingfisher is a government fund to protect otherwise viable businesses in event of a no-deal Brexit. It has no connection to Kingfisher plc, the owner of B&Q.

3. Project Redfold. This is the one where armed forces set up a command centre in a bunker under the UK’s ministry of defence to cope with various emergencies.

4. Operation Brock. This is the official name for the Kent traffic management system that will be deployed in the event of no-deal - it involves a disused airport full of lorries. A rehearsal of sorts was held in January.

5. Project Fear. Not an official “project”, but the toxic shorthand used by Brexiteers desperate to dismiss valid Brexit concerns. In return, Operation Yellowhammer has been dubbed Operation Chaos by opponents of chaos.

1 Owner of Dundrum Town Centre to sell prized assets
2 Can a first-time buyer get relief on a buy-to-let home?
3 Google unveils ‘budget’ Pixel 4a after Covid delay
4 Thousands back petition demanding State aid for Aer Lingus
5 Seán Quinn children demand share of lost business
6 Enlightened working: ‘You Days’ and unlimited paid leave
7 ‘I think cash is a thing of the past’
8 Over half of Ireland’s businesses in decline following Covid-19 lockdowns
9 Why supermarkets are struggling to profit from the online grocery boom
10 Irish clothing entrepreneurs: sustainable, affordable and ethical
Real news has value SUBSCRIBE