Chinese FDI to Ireland jumps 75% as it bucks global trend

First-half deal activity in the State up to $142m, from just under $80m a year ago 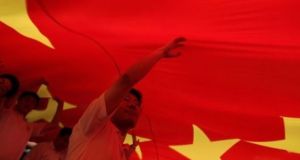 Chinese foreign direct investment (FDI) into the Republic of Ireland rose by 75 per cent to $142 million (€128.2 million) in the first six months of the year, new figures show.

The jump came as investment into Europe as a whole fell by 26 per cent to $9 billion, the lowest figure since 2015.

Deal activity in the Republic rose from just under $80 million for the first half of 2018 with expectations of further transactions in 2019, according to law firm Baker McKenzie.

The biggest deal locally was Emeri Nutrition’s opening of a $60 million infant formula facility in Co Meath, and China Reinsurance’s $40 million deal for the Irish unit of Chaucer Insurance.

“Ireland is an attractive destination and there’s a range of unique areas that are quite competitive, including financial services, airline leasing, Greenfield, and research and development. We see Chinese FDI rise when sizable deals are completed in these areas,” said Peter Lu, head of McKenzie’s China group in London.

The latest figures follow Chinese FDI into the State rising by 218 per cent from just under €30 million in 2018. That jump was largely due to the decision by Chinese biopharma company WuXi Biologics to invest €325 million in a manufacturing facility in Dundalk, Co Louth.

Chinese FDI into the Republic experienced a record year in 2016 with investment totalling almost $3 billion, although this was largely a result of the HNA’s Group acquisition of aircraft leasing company Avolon for $2.5 billion.

However, the total Chinese FDI figure is small in the context of the Republic’s total FDI inflow. According to the Central Statistics Office (CSO), direct investment in the Republic rose by nearly €20 billion in the fourth quarter of 2018.

According to figures supplied by the Chinese embassy in Ireland, there are more than 20 companies from China in the State, employing about 2,000 people in total.

The increase in FDI into the Republic came against a backdrop of global investment by Chinese companies dropping by 60 per cent in the first half to $20 billion. Of this, 94 per cent of investment came from the private sector.

While investment in Europe fell to $9 billion, in the US it was up 19 per cent from a low base to $3.3 billion.

The figures shows consumer products and services and automotive accounted for three quarters of total deal value in both Europe and North America.

Investment is expected to stay at a low level for the rest of the year, according to Baker McKenzie.