Activity in the euro area private sector picks up unexpectedly

Meaningful rebound still out of sight as sluggishness dampens optimism 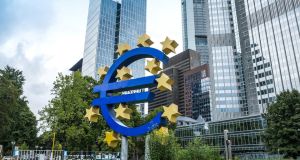 Germany, the euro region’s largest economy, faces the risk of falling into a recession should output contract again in the three months through September. Photograph: iStock

Activity in the euro area’s private sector unexpectedly picked up, though a meaningful rebound remains out of sight.

IHS Markit’s composite Purchasing Managers’ Index rose to 51.8 in August, indicating a slightly stronger expansion than in July. While manufacturing returned to growth in France, the outlook for Germany remained bleak, with orders falling the most in more than six years.

The euro area’s persistent sluggishness is damping optimism, and companies are preparing for the slump to last, according to the report. Industry in particular has faced a number of headwinds in the past year, including mounting global trade tensions and slowing demand from China.

“The lack of a quick rebound from the recent economic slowdown has impacted firms’ confidence, with sentiment the lowest in over six years,” said Chris Williamson, an economist at IHS Markit. “It appears that companies are braced for a sustained period of weakness, and as a result are showing greater reluctance to take on additional staff.”

After the 19-nation economy expanded 0.2 per cent in the second quarter, growth could slow further in the current period, according to the report.

Germany, the region’s largest economy, faces the risk of falling into a recession should output contract again in the three months through September.

European Central Bank policymakers are three weeks away from their next meeting, and are widely expected to respond to the bleak economic prospects with a first interest-rate cut in more than three years. – Bloomberg