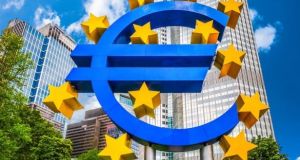 Investor morale also improved in Germany, rising to 7.9 - its highest since November 2018 - from 2.1 in April.

Investor morale in the euro zone improved in May for the third month in a row to hit its highest level since November 2018, helped by a buoyant global environment and the danger of a disorderly Brexit being averted until October.

The Sentix research group said on Monday its investor sentiment index for the euro zone rose to 5.3 in May from -0.3 in April. Analysts had expected a reading of 1.4.

“In May, the economic situation continued to improve globally, but also in Europe. Fears of a recession are thus receding into the background,” Sentix managing director Manfred Huebner said in a statement.

A sub-index on euro zone expectations improved for the fourth month in a row, reaching -0.3, its highest level since March last year. A current situation index rose to 11.0 from 3.8.

Investor morale also improved in Germany, with an investor sentiment index for Europe’s largest economy rising to 7.9 - its highest since November 2018 - from 2.1 in April.

“Apparently, the spark from the Chinese economy, which has recovered significantly since the start of the year, is increasingly jumping over to the export-dependent German economy,” Mr Huebner said.