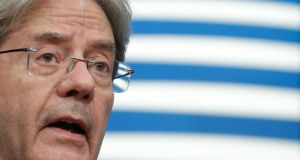 Europe will decide whether to extend the suspension of its rules limiting budget deficits and debt, known as the Stability and Growth Pact (SGP), in coming weeks, the Commissioner for Economy Paolo Gentiloni said on Monday.

“In coming weeks we will decide if and how to extend the freezing of the Pact, and in coming months we will start thinking about how to re-calibrate it according to Europe’s new strategic objectives,” Gentiloni told daily La Stampa in an interview.

He added that the new government led by former European Central Bank chief Mario Draghi was fundamental to reinstore confidence in Italy and that it would help overcome any potential resistance from other European member states with regards to reforming the SGP. - Reuters